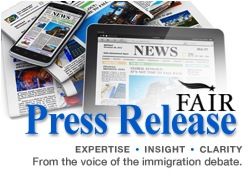 The following statement was issued by Dan Stein, president of the Federation for American Immigration Reform (FAIR) in response to comments made by Donald Trump.

“Donald Trump’s assertion that we categorically bar admission to people based solely on their religious identities is one that runs counter to American values, but is rooted in a grim reality that the Americans can no longer trust the government’s vetting process and its ability to screen out those susceptible to beliefs and actions inconsistent with life in a modern, Western-style democracy.  Certainly this is true at today’s all-time high levels of immigration and non-immigrant entry.  Failure to come to grips with this reality has the potential to radically alter the American way of life and undermine our national freedoms as the U.S. faces a threat of truly unprecedented dimensions.

FAIR does not support immigration restrictions based solely on religious faith in the absence of other factors that indicate an inability to support our constitutional framework.  Yet every nation has the right to exclude people when the manifestation of their religious, political, or ideological beliefs threaten public safety or is fundamentally at odds with the values and freedoms set forth in our Constitution. Moreover, the President retains a statutory authority to suspend any class of aliens he/she deems a threat to the vital security interest of the nation.”

Donald Trump Muslim trump
Previous ArticleHistory Repeats Itself: What Trump and others can learn from the 1924 Immigration Act
Next Article Cruz and Abbott Team Up to Empower States in Refugee Resettlement