You are at:Home»Politics»Anti-Sanctuary City Bill Back on Wisconsin Agenda 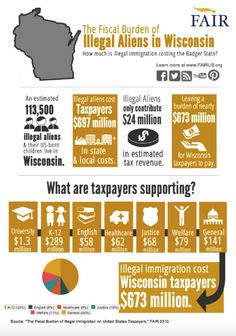 True immigration reformers in Wisconsin will take another stab at getting anti-sanctuary city legislation through the Assembly next month when lawmakers hold a hearing on Assembly Bill 450 (AB 450).

AB 450 prohibits jurisdictions in the State of Wisconsin from enacting an ordinance or policy that prevents employees from inquiring about the immigration status of a lawfully detained or arrested individual, or otherwise cooperating with federal immigration officials.   If a jurisdiction violates AB 450, a court may not only require it to comply, the Department of Revenue is required to revoke $500-$5,000 per day from the jurisdiction’s shared revenue fund (depending on the population of the jurisdiction).

The bill will be heard before the Assembly Committee on Urban and Local Affairs on January 20, 2016 at 10 AM in Room 412E of the State Capitol.  It was initially to be heard on December 15, but was pulled allegedly due to opposition to the bill from the pro-amnesty lobby.

Rep. John Spiros (R-Marshfield), the bill’s sponsor, contends that it was pulled from the calendar not because of complaints by the pro-amnesty lobby, but because they simply needed a larger committee room.  He also states that the opposition is mischaracterizing the bill.  “What people are saying this bill does, it doesn’t do,” Spiros said. “It’s not there to get rid of illegal aliens.  It’s really those who commit a crime.”

The Milwaukee-based pro-amnesty group, Voces de la Frontera, however, has been lobbying hard against it.  Implying litigation against AB 450 is inevitable if it passes, Christine Neumann-Ortiz, the executive director of Voces de la Frontera said, “[AB 450] opens up this can of worms — you’ll have local municipalities dealing with lawsuits when they have more important work to do.”

Regardless of the true reason AB 450 was pulled and put back on the Committee on Urban and Local Affairs’ calendar, the entire song and dance underscores the need for true immigration reformers to remain ever-vigilant.  Generally, bills cannot pass a legislative chamber without first going through the committee process by receiving a hearing.  Staying informed and making sure that state lawmakers hear your praise or concerns about a piece of legislation – even if it’s only in such early stages – is critical to this process.

AB450 anti-sanctuary sanctuary cities Wisconsin
Previous ArticleAmnesty Advocates Want to Hijack the 2016 Election. Will You Let Them?
Next Article Defining a Public Interest Objective is at the Heart of Real Immigration Reform