You are at:Home»Federal»Sen. Sessions: Foreign Born Population has More than Quadrupled since 1970 and Will Continue to Surge Over the Next 40 Years 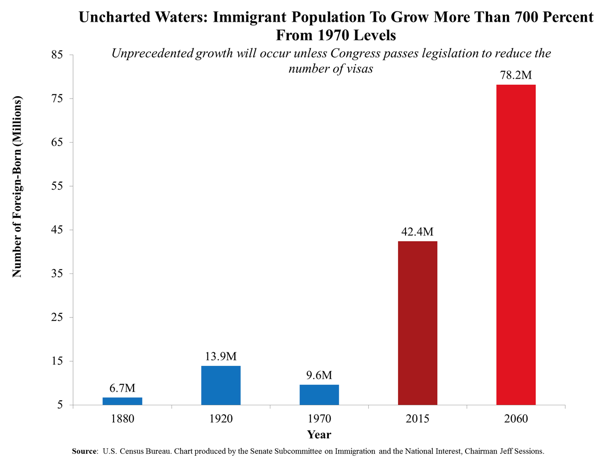 New data released by the office of Sen. Jeff Sessions (R-Ala.), chairman of the Subcommittee on Immigration and the National Interest, reveals that the foreign-born population of the United States has grown more than fourfold – from 9.6 million in 1970 to more than 42 million in 2015. Unless legislated brakes are applied, surging immigration will drive the foreign-born population of the U.S. to 78 million by 2060 – a 715 percent increase over the 1970 baseline.

By contrast, Sessions points out that even after the great wave of immigration during the late 19th and early 20th centuries, the foreign-born population topped out at 14 million in 1920 – about a third of its current size.

As the chairman of the Immigration and the National Interest subcommittee observes, this unprecedented and unceasing wave of immigration is serving no identifiable national interest.

projection Sen. Sessions visas work visas
Previous ArticleImmigration Hypocrisy At The UN: When Does Our “Xenophobia” Begin To Look Like Their Europhobia?
Next Article As Administration Downsizes the Military, Bases are Turned into Housing for Migrants