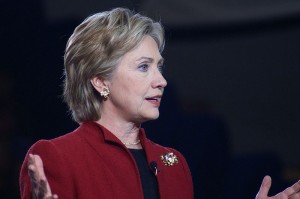 On January 6 Hillary Clinton, whose campaign has proposed approximately one trillion dollars worth of additional future spending, declared that the U.S. federal government simply can’t put the cash together for a border fence.

In an interview with FOX 5 Las Vegas, anchor Christine Maddela asked Clinton if the U.S. could “afford to build a wall along the southern border or ship everyone back?” The Democratic hopeful took on an unusual fiscally reserved approach with her answer:

Well, I don’t think so. I think it’s particularly challenging for those who are advocating that to respond to the fact that we have spent many hundreds of billions of dollars tightening the border security on our southern border. And we do have barriers in many areas. The terrain is very, very difficult.

The border fence is estimated to require about $15-$25 billion to complete, with an additional annual cost of approximately $700 million for maintenance. However, when the price tag for this project is compared to the $113 billion FAIR estimates illegal immigration costs American citizens every year, even a small deterrence makes fiscal sense. If this increase in border security offered even a 5% decrease in the yearly cost of illegal immigration, the fence would pay for itself within 6 years. Taking this step further and coupling it with common-sense immigration policy reform, such as mandatory E-verify participation for employers, would save our nation billions of dollars annually.

In short, the math behind Hillary Clinton’s claim about the border fence simply doesn’t add up. It also asks an important question: Why is the fiscal cost of border security such a problem for her when far more expensive endeavors garner no such concern?