You are at:Home»Federal»Congress»Spanish Language GOP State of the Union Response Calls for Amnesty 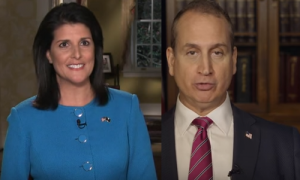 Following President Obama’s final State of the Union speech Tuesday night, Republicans offered two different responses – and the differences between them reveal why many GOP voters no longer trust their party leaders on immigration.

Gov. Nikki Haley (R-S.C.) and Rep. Mario Diaz-Balart (R-Fla.) delivered separate speeches in English and Spanish. When touching on immigration, Gov. Haley gave the “we must fix our broken immigration system” line that has been used ad nauseam by both parties to obfuscate their true intentions on the issue. However, Rep. Diaz-Balart was far more overt in calling for amnesty, saying we must “find a legislative solution” and “offer a permanent and humane solution to those who live in the shadows.”

Below is a brief comparison of the English and Spanish versions, as translated by The Miami Herald. Keep in mind that Gov. Haley admitted House Speaker Paul Ryan (R-Wis.) and Senate Majority Leader Mitch McConnell (R-Ky.) approved her speech, so it’s safe to assume that the Spanish version received similar approval.

At the same time, that does not mean we just flat out open our borders. We can’t do that. We cannot continue to allow immigrants to come here illegally. And in this age of terrorism, we must not let in refugees whose intentions cannot be determined.

We must fix our broken immigration system. That means stopping illegal immigration. And it means welcoming properly vetted legal immigrants, regardless of their race or religion. Just like we have for centuries.

At the same time, it’s obvious that our immigration system needs to be reformed. The current system puts our national security at risk and is an obstacle for our economy.

It’s essential that we find a legislative solution to protect our nation, defend our borders, offer a permanent and humane solution to those who live in the shadows, respect the rule of law, modernize the visa system and push the economy forward.

You can view the speeches in their entirety here: