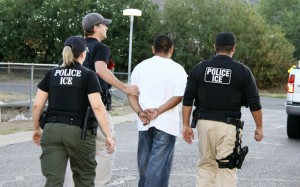 One year ago Sunday an illegal immigrant went on a shooting rampage in Houston that killed two, and hurt several more. Today, the Federal government and the city of Houston still refuse to release most of the information on the killer, Victor Reyes, who was deported four times between 2003 and 2010, and holds an extensive criminal record reaching back to 2002. The Feds claim the 1974 U.S. Privacy Act, which protects American citizens from having the government unfairly harvest and use their personal data, should also extend to illegal aliens under federal investigation.

The government did the right thing several times by sentencing and deporting Reyes, but the laughable excuse for border security, combined with quite lenient sentences, allowed this dangerous criminal to re-enter the states numerous times and eventually kill two innocent people.

He revealed that Reyes was “extremely intoxicated” and had a “significant amount of cocaine” in his system. He also identified the weapon, a .380 caliber pistol that he said was legally purchased at one point, but authorities haven’t determined how a convicted felon and undocumented immigrant, barred from buying or possessing firearms, obtained it.

The CBS affiliate also detailed the City of Houston and Federal Government’s reasoning behind censoring information related to this case:

The Houston Police Department, using its own discretion under the Public Information Act, blocked release of all but a few details on the Golvach and Weston shootings. The department cited a provision allowing it to withhold criminal records absent a final disposition, such as a conviction or deferred adjudication. Since Reyes is dead and the city’s case is otherwise closed, that means Houston police likely can withhold the information indefinitely.

The federal government holds onto its files with a tight grip, too, citing the 1974 U.S. Privacy Act. The act covers only U.S. citizens and lawful permanent residents, but Immigration and Customs Enforcement has decreed that its protections apply to federal immigration detention records, even those related to undocumented immigrants convicted of horrific crimes.

There are two tragic things we can take away from cases like this. We learn that young, innocent Americans are at risk of assault and murder thanks to the United States’ lack of security on our southern border. They also make it quite clear the current administration intends to do all it can to censor the risk that criminal illegal aliens pose in order to continue pushing false narratives instead of being honest about the realities that an unchecked immigration system poses.