You are at:Home»Federal»Clinton and Sanders Trade Accusation as Both Try to Disavow Previous Positions on Immigration 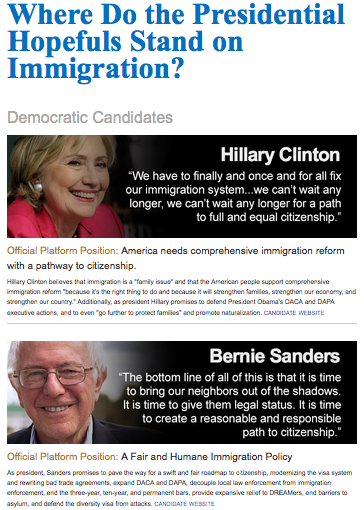 Congratulations, you’re both right. Both of the leading contenders for the Democratic presidential nomination were concerned about the impact of illegal immigration and mass immigration on American workers, before they decided that pandering on immigration would help them with Democratic Party activists (not to be confused with rank and file voters).

In 2007, Sen. Bernie Sanders gave one of the most impassioned floor speeches opposing a sweeping amnesty and guest worker bill that was supported by leading congressional Democrats and President Bush. “What this legislation is not about is addressing the real needs of American workers … What it is about is bringing into this country over a period of years millions of low-wage temporary workers, with the result that wages and benefits in this country, which are already going down, will go down even further,” Sanders said on May 22, 2007. (Sanders subsequently supported the very similar Gang of Eight bill in 2013.)

When she was campaigning for the Democratic nomination in 2008, Clinton opposed granting driver’s licenses to illegal aliens, going so far as to pressure then-New York Governor Eliot Spitzer to block such an effort in her home state.

Fast forward to 2016: The self-declared Vermont socialist now supports amnesty and work authorization for virtually all illegal aliens in the U.S. and vast increases in new workers who can compete for jobs in America.

Clinton supports much the same. Now, instead of being adamantly opposed to illegal immigrants, she is blatantly exploiting them and their children in a desperate search for votes in her campaign ads.

Click on the graphic to see Where do the Presidential Hopefuls Stand on Immigration.