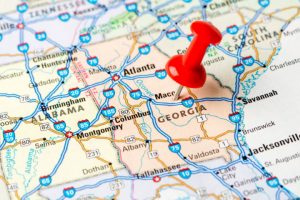 The Georgia Senate passed SB 269 on Friday, February 26, underscoring the Peach State’s reputation as a leader in the fight against illegal immigration.  Indeed, Georgia already has several pro-immigration enforcement laws on the books, which SB 269 by Sen. Jesse Stone (R-23) serves to strengthen.

Specifically, Georgia law already requires all public, and private employers with more than 10 employees, to participate in the federal E-Verify employment eligibility authorization program.  Moreover, Georgia requires state and local governments to use the federal SAVE system to verify the lawful presence of individuals before administering public benefits.

To enforce these provisions, Georgia law requires agencies to submit annual compliance reports. If the entity subject to the compliance report is found in violation of the law, the state may require certification of compliance to receive funding.

SB 269 strengthens these current laws in two key ways.  First, the bill adds Georgia’s anti-sanctuary provisions to the list items for which local governments must issue annual compliance reports.  Second, it amends current law by asserting that the state shall require certification as proof of compliance to receive funding.

In short, SB 269 would make it so that jurisdictions in Georgia that refuse to comply with state law prohibiting sanctuary policies, requiring E-Verify, and directing the use of the SAVE system, would lose state funding.  The Senate overwhelmingly passed the legislation, 49-2.

Senator Josh McKoon (R-29) introduced Senate Bill 6 to close the unintentional loophole that allows illegal aliens to receive regular Georgia driver’s licenses.  Currently, Georgia law allows driver’s license applicants to present documents showing a grant of deferred action to meet its lawful presence requirement. “We have very little in the way of identity verification for people that are receiving these licenses and who have no lawful status,” Senator McKoon commented just before the vote.

A 2015 poll conducted by Rosetta Stone Communications revealed that Georgia voters oppose allowing illegal aliens, even those who have received deferred action under President Obama’s executive action, to receive driver’s licenses. Sixty-four percent of registered voters in Georgia supported legislation to prevent illegal aliens with deferred action from receiving driver’s licenses in the state, with only 21% of voters opposing.

Currently, only 12 states and the District of Columbia have laws that grant driving privileges to illegal aliens. However, President Obama’s executive amnesty, if allowed to go into effect, will make illegal aliens eligible for driver’s licenses all 50 states, in addition to shielding illegal aliens from deportation and rewarding them with work authorization.

Both bills now go to the Georgia House, where Republicans have a margin of 118-60. The Georgia General Assembly adjourns March 31, giving the lower chamber a month to move on the legislation.  Stay tuned to FAIR for updates….

driver's licenses Georgia sanctuary cities
Previous ArticleHow to Deal With More Than 11 Million Illegal Aliens: Discourage Them From Remaining (It Works)
Next Article Top U.S. NATO Commander Says Russia and Syria are Using Migration as a Weapon Against the West