You are at:Home»Immigration Issues»Asylum & Refugees»How to Deal With More Than 11 Million Illegal Aliens: Discourage Them From Remaining (It Works) 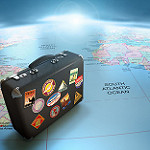 An article in the Los Angeles Times reveals that the German government gave more than 37,000 willing migrants, out of the 1.1 million who have arrived recently, a one-way ticket back to their homelands. The number of migrants who returned is undoubtedly higher, since some paid their own way back home.

Some returning migrants realized that smugglers made lavish promises about what life would be like in Germany, including the prospect of getting a house for free. Many hoped to bring their families over, which would swell the throng, but decided to rejoin their loved ones. Some cited bureaucratic limbo as a reason for their disaffection, while others claimed they were tired of living in large open rooms and being served food they find unpalatable.

In the United States, it is routinely assumed that it would be impossible to deport the 11.7 million or so illegal aliens in the country, but as the case in Germany makes clear, even migrants from war-torn nations like Iraq and Syria will indeed go home if they cannot get what they want.

The more Americans coddle illegal aliens by granting drivers licenses, allowing them to take jobs and cutting them loose when they are arrested for crimes, the more welcoming we make it for them to thumb their noses at us. If we don’t even respect and uphold our own laws, why should they? If we enforced our laws and secured our borders, a large number of immigrants will up and leave on their own accord.

After Arizona passed two statutes, SB 1070 and HB 2136 in 2010, which mandated enforcement of immigration laws and added new ones to the books, illegal aliens  voluntarily left the state in large numbers. It is a simple equation: if we enforce  our laws and eliminate rewards, many illegal aliens will leave on their own.