You are at:Home»Federal»The Republican Elites: “They Had it Coming” 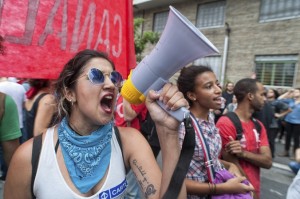 Wherever you stand on the presidential campaign one thing is clear.  Donald Trump has defined the immigration issue in an way that resonates with many Americans.  In doing so, he has unleashed the wrath of the far left, so dominant in immigration policy debates since 2008.  This radical fringe now openly asserts that mass immigration flows must grow ever larger in order to consolidate a political dominance.  Nothing will be allowed to stand in its way, not even our most sacred democratic processes.

What happened last weekend in Chicago was typical of what America’s true immigration reformers have experienced on a regular basis lately.  Donald Trump had to contend with professional harassers occupying seats at his own rally for the purpose of shutting down his event. MoveOn.org allies along with infamous amnesty anarchist Luis Gutierrez have a long track record of seeking to disrupt political speech in order to intimidate opposition.  All of us have experienced it over many years. The media don’t usually report it, sadly, or if mentioned at all, it is a wild distortion of reality. In truth, this extremist fringe out of Chicago is a bunch of intolerable bigots.

How the media have reported the events in Chicago is telling:  Trump is routinely blamed for using rhetoric that supposedly justifies reactionary violence.  This is typical, and over the years, the “establishment wing” of the Republican Party has lost its footing in caving to the unreasoning demands of the radical border anarchists.  Now the backlash is upon us.

In election after election, as one Republican presidential candidate after another has gone down in flames promoting an amnesty agenda, major donors and the party’s business wing have stubbornly refused to accept the national impulse for self-determination and the rule of law — a determination we now see dominating the Trump effort.  Trump — now well on his way to the 2016 Republican nomination — is the ultimate disrupter.

Floating the Kasich or even the Ryan name simply reinforces the frustration. In the words of Chicago’s Cell Block Tango, “they had it coming.”