You are at:Home»Politics»Legal Victory in Oregon Makes Ballot Referendum Regarding Illegal Employment Clearer to Voters 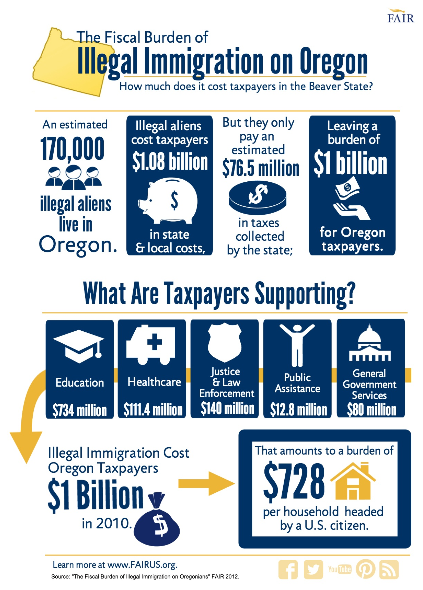 Stopping illegal immigrants from using fraudulent paperwork to get jobs is easy to do: the federal government established the E-Verify system to ensure that only people with legal documentation are able to work in the United States. In addition to taking jobs from American citizens, many illegal immigrants take on their identities by committing identity theft and trafficking in stolen and misappropriated social security numbers.

In Oregon, the Immigration Reform Law Institute (IRLI), the non-profit legal affiliate of FAIR, won a victory to ensure that the ballot language for a referendum that is going before voters is clear and unambiguous. The court struck down the ballot wording provided by the state attorney general for being too vague about its true intent.

The referendum, Initiative Petition 52, would require businesses with five or more employees to confirm that their employees are legally eligible to work through E-Verify. Activists of the organization Oregonians for Immigration Reform (OFIR) are responsible for initiating the petition.

“The ballot language written and certified by the attorney general hid the true purpose and effect of the initiative and would have only served to confuse voters,” Dale Wilcox, executive director of the Immigration Reform Law Institute, told Breitbart Texas.

It is illegal to knowingly hire illegal aliens and the E-Verify system is effective and easy to use, but the federal government and the IRS look the other way when illegals use purloined social security numbers to obtain employment.

Four other states require all employers to use E-Verify for every new hire. Another ten states require state agencies and contractors to use the system while two states, California and Illinois place limits on the use of E-Verify.

Removing the possibility that illegal aliens can get jobs is a policy that FAIR supports, arguing that if the economic magnets that drive immigrants to cross the border illegally are removed, then fewer people will come here and those who are here illegally will not stay.

The federal government created E-Verify in 1997 to help support provisions in the 1986 and 1996 federal immigration laws that required employers to ensure that employees are in the country legally.

E-Verify would also put a stop to the use of fraudulent Social Security numbers, used by immigrants to get a job and pay taxes. Many numbers are assigned to children, so the theft goes unnoticed for years, yet the IRS refuses to inform taxpayers whose identities are stolen that someone else is using their number.

IRLI, which helped write an E-Verify law in Arizona upheld by the Supreme Court in 2011, is girding for another legal battle with illegal alien advocates in Oregon who are attempting to overturn a ballot initiative that denied drivers’ licenses for illegal aliens.