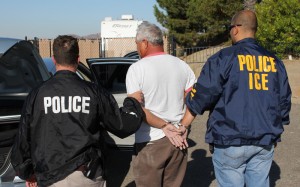 Despite local sanctuary policies, law enforcement authorities requested that Immigration and Customs Enforcement (ICE) officials detain Mejia after he was formally charged with vehicular homicide. However, ICE refused to take Mejia into custody, allowing him to post bond.

The federal government didn’t seem to think his immigration status mattered either. In a statement issued by ICE, the agency explained that Mejia was not a priority for removal under its newly instituted federal Priority Enforcement Program (PEP) because he was not an alien that posed a danger to national security, or had been convicted of a felony, “significant” misdemeanor, or three or more misdemeanors.

Despite the fact Mejia had multiple charges, previous bench warrants for his arrest, and was accused of killing someone under the influence, that still wasn’t enough for him to be a priority for federal agencies. Alarmingly, when it comes to matters outside of national security, ICE only considers those aliens who have been convicted of a crime a priority; those merely charged, regardless of the severity, don’t make the cut.

Fast forward two months: tons of national media coverage, and the immensely huge embarrassment on the hands of ICE. The Department of Homeland Security has now advised that Mejia’s immigration status really does matter, adding him to the Top 10 Most Wanted Illegal Aliens List.

As if it wasn’t bad enough the federal government picks and chooses which convicted illegal aliens are a priority, ICE Director Sarah Saldaña faced an even bigger gaffe when she implied that federal agents would have responded if Root had died, rather than being seriously injured at the time ICE was contacted.

Of course, how inconvenient for Sarah Root and her family that she had not passed away fast enough for Mejia to be considered a priority to federal officials. Although Saldaña’s statement was completely absurd, the fact remains that Sarah Root died well before ICE was ever contacted. Furthermore, what difference would her condition make?

Obviously, it is unfortunate that a young woman died as a result of an illegal alien drunk driver. But what if she had been paralyzed or suffered from a few broken bones? Should that make the public safety threat posed by Mejia less serious in the eyes of federal officials? Regardless of the outcome, a victim of any crime should have the assurance that local, state, and federal authorities are doing what it says on their badges: “to protect and serve.”

Apparently, the advice of federal agencies to citizens who are victims at the hands of illegal aliens is make sure the perpetrator was previously convicted of a felony or numerous misdemeanors. And if not, perhaps the victim should die before officials decide whether to release the perpetrator.