You are at:Home»Politics»By the Numbers: How the Immigration Tsunami Is Overwhelming Our Schools 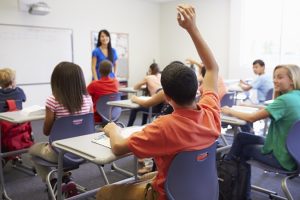 Forcing schools to educate the children of legal and illegal immigrants amounts to the greatest unfunded mandate that the federal government has ever placed on the states.

With schools straining to provide for an influx of new students, the need for new teachers to serve the growing Limited English Proficiency student population represents a massive potential taxpayer outlay that will keep school districts scrambling to balance their budgets for years.

Since 2009, the Border Patrol has apprehended 242,354 Unaccompanied Alien Minors, around 98 percent of whom came from Mexico, El Salvador, Honduras and Guatemala. And they keep on coming: more than 20,000 between October 1, 2015 and January 31, 2016. Along with other illegal alien minors, they are able to attend public schools at no cost and without fear of reprisal, thanks to the 1982 Plyler v. Doe Supreme Court decision.

Over the next five years, local districts nationwide will have to find an extra $4.8 billion to hire the 82,408 additional teachers that the National Center for English Language Acquisition projects will be required to serve this population – if they can find them. Around 10 percent of all public school students are in LEP programs, but only 1 percent of all teachers are certified in English as a Second Language. Several states grant teaching and other licenses to illegal aliens and justify the policy by noting the teacher shortage.

Right now, local school districts spend $21.5 billion on the salaries and benefits of 346,776 LEP teachers. None of these figures include supplies, administration, building maintenance or other costs borne by taxpayers. In fact, the State of Maryland and the Government Accountability Office calculated that it could cost twice as much to educate LEP students than other pupils.

Though the burden to hire teachers falls primarily on state and local governments, the federal government spent $637 million in 2013-2014 on Title III programs to provide language instruction to students with limited English skills.

But the sad fact is that despite all of the resources provided to LEP students, there is little to show for it. These students have demonstrated limited progress in all subject areas, not just language, and they may be affecting the performance of non-LEP pupils.

In comparison, 40 percent of non-LEP fourth graders perform at the two highest levels, Proficient and Advanced, with one-third displaying Basic skills. The rest, 27 percent, achieve at Below Basic level. In other words, even though non-LEP students perform better than their LEP counterparts, more than half of them are only managing Basic or Below Basic work.

For eighth grade LEP students last year, the numbers are also striking: 71 percent have Below Basic skills, one quarter score at the Basic level and only 4 percent are Proficient. The statistic for the Advanced level rounds out to zero. The results for 12th grade LEP students in 2013 (the last year statistics are available) are even worse: a full 80 percent demonstrate Below Basic skills. The remaining 20 percent performs at the Basic level.

The percentage of LEP students who graduate on time, moreover, is appalling: 39 percent in New York, 24 percent in Nevada and just 20 percent in Arizona. Other states have higher rates, but just because someone graduates there is no way to determine if he or she met rigorous standards. And, of course, school systems continue to pay for students who stay in high school longer than four years.

And clearly, non-LEP students are also sinking, according to the latest figures. The percentage of eighth graders that score Proficient or above in every subject is abysmally low: just 18 percent in United States history, 27 percent in geography, 27 percent in writing and 33 percent in math.

As colleges across the country sound the alarm about ever-increasing numbers of students who are unprepared for academia, the public school system is failing all constituents, not just LEP pupils. In the future, it will cost hardworking Americans more to achieve such mediocrity.