You are at:Home»Jobs & Economy»FAIR vs ITEP Estimates of the Costs of Illegal Immigration 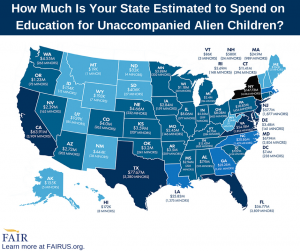 An article on the Philippine-based Inquirer website on April 5, relied on data from the Instituted on Taxation and Economic Policy (ITEP) and from FAIR to describe opposing conclusions regarding the impact of illegal aliens.

Although the article attempted to appear impartial, it clearly tilted toward the side of supporting illegal aliens by offering examples of illegal aliens who have regularly paid taxes and supposedly have not received any welfare benefits.

The article also tilts in favor of defenders of illegal aliens in the comment; “FAIR’s focus on tax contributions compared to benefits received has also been assailed as the wrong basis for immigration policy. Based on that method, a huge chunk of native-born Americans can also be categorized as freeloaders for receiving way more benefits than they contribute in taxes.”

That argument suggests that if some U.S. citizens are a fiscal burden, we should also accept illegal aliens as burdens on the taxpayer. That is in effect an argument that we should have an immigration open door policy and welcome all comers regardless of the impact that they might have on the American public. There are some people who apparently support that view, but fortunately they are a small minority.

Previous ArticleBy the Numbers: How the Immigration Tsunami Is Overwhelming Our Schools
Next Article Did Your Republican Senator(s) Join the Amicus Brief Opposing Obama’s Executive Amnesty?