You are at:Home»Law & Justice»Illegal Immigrants and Their Allies Demand the Vote, Handouts at Supreme Court 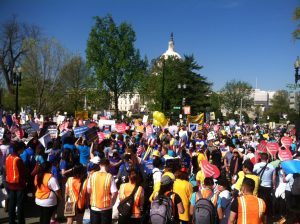 On the steps of SCOTUS

Pro amnesty advocates showed up in force outside the Supreme Court building and the Capitol to rally for their cause as the Supreme Court heard arguments in the pivotal case of Texas v. United States. The gathering illustrated the hypocrisy displayed on the immigration issue.

One speaker after another passionately demanded that illegal immigrants be granted the right to vote and be rewarded for breaking the law. Commuters exiting Union Station in Washington, D.C., could hear every word of the rally, since the jumble of groups fighting for open borders and amnesty erected a huge sound system in Columbus Circle, the staging point for a march to the Supreme Court. 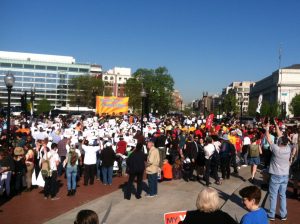 The elaborate set-up featured a stage, sixteen speakers, two subwoofers and a professional mixing board. The groups handed out signs and t-shirts emblazoned with pro-amnesty messages all day long. Who paid for that? The biggest organizations represented in Columbus Circle included the NAACP, environmental organizations, the Service Employees International Union, the Communications Workers of America, the AFL-CIO and the United Food and Commercial Workers of America, the very interests that are threatened by open immigration. The irony is that African-Americans, workers and the environment take a hit if the borders remain open and amnesty is granted.

The song “Ready or Not” by the Fugees, a 1990s rap group whose name is a nod to the term refugees, boomed over the set. The lyrics include the line “ready or not refugees are taking over” and a chorus that could be interpreted as a love song, but not necessarily: “Ready or not, here I come/You can’t hide, gonna find you and take it slowly/Ready or not here I come, you can’t hide/Gonna find and make you want me.” 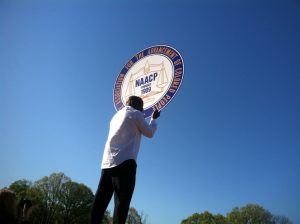 When the marchers stopped for a photo op, many of them sang “Ain’t Gonna Let Nobody Turn Me Round,” the old staple form the Civil Rights battle of the 1950s and 1960s. Yet they were quite free to march wherever they wanted. When a Mariachi band began to play, the crowd at the Supreme Court cheered.

The protestors came from California, from North Carolina and other states to demand vague entitlements like justice, but most voices sought free services and voting eligibility. Sings read “One Person, One Vote” and “My Vote, My Right.” They waved the Stars and Stripes and spoke about how no one can deny their “inalienable rights.”

One sign read “I Am an American,” another carried the vague statement “Stronger Communities, Stronger America.” But the protestors also focused on how deportations break up families. The issue often is the anchor baby, whom the family can indeed take with them if they are deported or cannot find work. These families had their child knowing that such a day might come. Many held placards with the photos of forlorn-looking children that read “I Fight for Sophie” and “I Fight for Zaira and Dulce.”

CASA and La Raza also maintained a large presence and a lot of rhetoric skewed left, again, with hypocritical fervor. “We are the 99 percent,” they chanted at one point. Others held signs that read “Money Out, Voters In.” Ironically, amnesty and open borders help the 1 percent even more by creating a permanent underclass of cheap labor. Why the Washington, D.C., and Berkeley-based environmental group Friends of the Earth supports illegal immigrants along with a flood of legal immigration is hard to figure out, especially since they claim that “climate crisis is the definitive challenge of our time,” according to their website.

Asked why labor unions and African-Americans would support the very population that undermines their well-being, Alyson Kennedy, running for president on the Socialist Worker Party ticket said that she sees this support as a linchpin in creating broad worker solidarity.

“This is a fight to try and build a labor party in the country, since this is all one movement and we need to be together,” she said. She also supported a “federally-funded jobs program and free federal health care,” among other programs. She stood next to a table covered with leftist literature, including The Militant newspaper and The Communist Manifesto in Spanish. 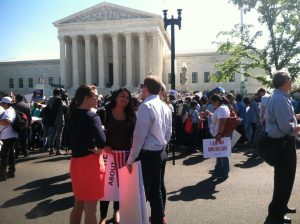 Things turned surreal when a gentleman on a bike grabbed two megaphones and began chanting slogans about Jesus. And, as FAIR president Dan Stein spoke to a television reporter on air, a young woman accompanied by four other people who refused to identify themselves, held up a sing equating FAIR with the KKK. She could not identify any statement on the FAIR website that promoted hate, but merely regurgitated the same accusations made by the discredited Southern Poverty Law Center.

Yet, the main rallying cry turned out to be demands for handouts and legal relief. “Education, Not Deportation.” “Give Us DAPA Now.” “No DAPA, No Peace.” Many played up the education dreamer role: “My Dream is to have the opportunity to complete my education.” Another young man wore a t-shirt that read “Undocumented, Unafraid, Unapologetic.”

When laws go unenforced for so long, it emboldens the lawbreakers, whose demands increase as society capitulates. One African-American attendee shook his head and said “imagine all these people who broke the law and now want a bunch of freebies. If I went down to Mexico and did that, what would happen to me there?”

Supreme Court us vs texas
Previous ArticleSupport Nebraska Gov. Ricketts’ Veto of Licenses for Illegal Aliens
Next Article Say “No” to Making Massachusetts a Sanctuary State