You are at:Home»Politics»United States v. Texas: A Primer on the Supreme Court Immigration Case 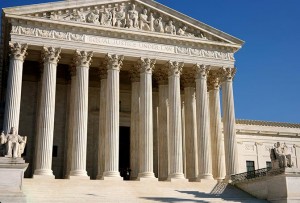 Today, the Supreme Court will hear arguments in the case United States v. Texas, which questions the constitutionality of President Barack Obama’s unilateral grant of de facto amnesty to almost 5 million illegal aliens. In the case, Texas and 25 other states contend that by implementing these programs, the president overstepped his legal bounds. The Constitution states that the president shall “take care that the laws be faithfully executed” and that Congress “shall have the power” to “establish a uniform rule of naturalization.” At issue are several executive actions taken by the president to shield illegal immigrants from deportation and offer benefits and services on what is alleged to be a temporary, but renewable, basis. Regarding this case, FAIR President Dan Stein calls it “the most important” one “the Court will decide this year.”

Read the background on this monumental case.