You are at:Home»Politics»Intel Lays off U.S. Citizens While Lobbying to Increase Cap on H-1B Visas 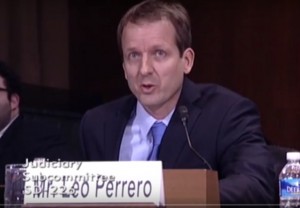 Many large corporations claim that the Unites States is experiencing a critical shortage of high-tech workers. Included in this group is Intel, a behemoth of the computer and technology industry. In a post for the company’s policy blog, Lisa Malloy, Director of Policy Communications and Government Relations, claimed the U.S. has a “high-skilled workforce shortage in the STEM fields critical to innovation: science, technology, engineering and mathematics.”

Conveniently, Malloy proposed immigrant labor, which is far cheaper than hiring domestic workers, as the solution, “Increasing the H-1B visa cap will help America’s high-tech companies recruit the talent they need to continue the relentless pace of innovation that sustains our national competitiveness, drives economic growth and creates jobs in the process.”

Less than a month after making this claim, Intel announced a plan to fire 11 percent of their workforce as part of a shift away from the PC market and into cloud-based data solutions. The move will leave up to 12,000 high-skilled workers without a job. It is expected that these layoffs will impact Intel’s Portland, Oregon location worst—a compound where nearly 650 H-1B visa holders work. Overall, Intel employs as many as 3000 foreign guest workers every year, raking 14th among all visa sponsors.

Intel has fired 1,000s of workers before. In 2014, the company implemented a plan to lay off 5 percent of its total workforce, approximately 5,380 jobs. Like now, these layoffs were announced at the same time their corporate lobbyists pushed for an expansion of the H-1B program, and while the company hired as many foreign guest workers as they possibly could. Despite the blatant contradiction, they continue maintaining that this practice is a response to a shortage of available career-seekers instead of an attempt to cut costs by hiring foreign workers over skilled Americans.

Other corporations are replacing high-skilled Americans with foreign labor as well. Walt Disney World in Orlando, Florida fired 100s of IT professionals last spring and forced them to train their replacements before departing. Leo Perrero, one of the employees Disney fired, acknowledged that the H-1B program is being used to line corporate pockets. “This situation at Disney is not an anomaly,” he said. “This same abuse of the H-1B program is happening nationwide.” While Congress and the Department of Labor have decided that intentionally replacing native employees with guest workers is within the intentions of the law, it does not mean the program is beneficial to the national economy or job market.

Perrero is correct in his allegation; the claim that there is a shortage of highly trained workers is false. In fact, 66 percent of the more than nine million Americans with degrees in Science, Technology, Engineering or Mathematics are either unemployed or hold jobs in a field outside their area of study. These U.S. citizens are facing a shortage of opportunity thanks to the annual influx of foreign workers who add more competition to an already crowded market, expect lower pay and hold no expectation of long-term loyalty from the employers who take advantage of them.

Whether by importing foreign labor or exporting the work to other countries, Americans are losing their jobs. The Federal government, along with many major corporations, are failing to show U.S. citizens the loyalty they deserve. They reward pursuing a degree and years of hard work by driving down employment opportunities and the average wage.