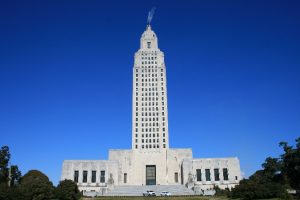 The Louisiana House Committee on the Judiciary unanimously voted to advance two measures last week to combat sanctuary policies in the state, House Bill (HB) 1148, and HB 453. The legislation is a part of a nationwide effort to halt the recent trend of local governments with policies meant to impede the enforcement of immigration law by refusing cooperation with the U.S. Immigration and Customs Enforcement (ICE).

Sanctuary policies are ordinances, resolutions, executive actions or any initiatives that prohibit local officials from inquiring, acting on, or reporting an individual’s immigration status—even when there is reasonable suspicion that an individual is in the country illegally. Louisiana’s largest city, New Orleans, adopted a sanctuary policy earlier this year that prohibits its law enforcement from so much as inquiring into an individual’s immigration status.

Kansas Secretary of State, Kris Kobach, testified before the Committee in support of the legislation. “When ICE is calling you, it’s because they’ve identified that person as an extremely dangerous person or gang member. It’s someone they really want out of this country,” commented Kobach. “It’s only a matter of time for New Orleans before someone is released back onto the streets and goes on to commit a crime of violence,” he added.

HB 1148 and HB 453 must be approved by the full House of Representatives before it can be sent to the State Senate for consideration.