You are at:Home»Immigration Issues»Crime»New Report Shows Nearly 200,000 Criminal Aliens Arrested in Texas Since 2011 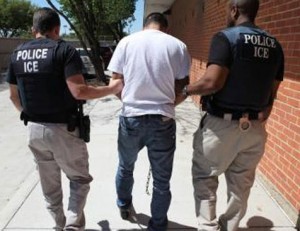 Less than two weeks after the U.S. Immigration and Customs Enforcement Agency (ICE) released troubling figures about how many illegal aliens the agency caught and released, the Texas Department of Public Safety (TXDPS) announced that Texas alone has arrested more than 190,000 criminal aliens for a total of 507,000 offenses since June 1, 2011. TXDPS officials estimate that at least 66 percent of these criminal aliens have been listed “by DHS status as being in the U.S. illegally at the time of their last arrest.”

The arrests have already resulted in more than 227,000 convictions, with many potential convictions still pending in the court system. Drug-related cases constituted the largest number of offenses with 29,668 convictions; assault charges made up 22,439; obstructing police resulted in 19,668; and 16,567 stemmed from theft charges. A concerning number of convictions, 6,206, were for heinous crimes like homicide, kidnapping, sexual assault and weapons charges.

These statistics tell a troubling story: tens of thousands of Americans in Texas alone are being assaulted, raped, kidnapped and murdered as a direct result of careless immigration policies. FAIR estimates that approximately 1.8 million illegal aliens currently reside in the state of Texas. This means that nearly 10 percent of that number faced serious criminal charges in the past five years alone.

Since Texas has the longest U.S. border with Mexico and a very large population, it takes on a much larger than average share of the nation’s illegal alien population. However, due to the state legislature’s failure to pass sanctuary city restrictions in three consecutive sessions, many municipalities welcome these dangerous criminals back onto the streets.

First term governor Greg Abbott began to take measures into his own hands last October by promising to crack down on local governments that refuse to honor ICE detainer requests for criminal illegal aliens. He followed through on this promise by immediately sending a warning letter to Dallas County Sheriff Lupe Valdez. “‘Sanctuary City’ policies like those promoted by your recent decision to implement your own case-by-case immigration detention plan will no longer be tolerated in Texas,” the Republican governor declared. He also signed a record $800 million border security budget passed during the 2015 state legislative session.

Opponents of these new measures dismiss the constant flow of troubling data, claiming instead that Gov. Abbott’s new directive and increased border security budget are intended to unfairly discriminate against immigrants. “He’s trying to be the Donald Trump of Texas,” said Democratic state Rep. Rafael Anchia, whose district falls within Sherriff Valdez’s jurisdiction.

In a UT-Texas Tribune poll taken in November, 2015, more Texans listed border security and illegal immigration as the top issue facing the nation than any other issue. These sentiments are manifesting themselves as voters reward candidates who take this issue seriously such as Governor  Abbott and Lt. Governor Dan Patrick. And, in the state’s March 1 Republican presidential primary, where voters handed more than  70 percent of the tally to Ted Cruz or Donald Trump—the two GOP candidates who made immigration enforcement centerpieces of their campaigns.

Voters in Texas have made it clear that are tired of suffering from lax immigration policies. However, as long as the Federal Government continues to ignore the devastating effects of illegal immigration, border states like Texas will continue facing the brunt of the issue and American citizens will continue to needlessly suffer.