You are at:Home»Immigration Issues»Globalization and You: Be Afraid. Be Very Afraid 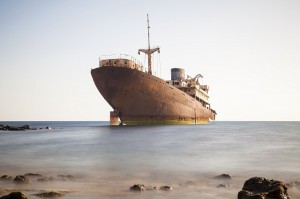 After a welder burned himself to death at a shipyard in Poland, investigative reporters at Vice discovered that there are around 50,000 North Korean laborers working in Europe who live like slaves. Most of their money goes to the ruling party in the dictatorship and the men toil in dangerous working conditions for long hours with no recourse.

A shady network of placement firms works with government officials to ensure that the companies get their manpower. Vice tried to untangle a “complex web of organized exploitation, bureaucratic chaos, official indifference, and political ignorance that extends all the way to the European Commission.”

The plight of the North Korean forced laborers offers an exaggerated version of what is playing out in the United States. The cast of characters includes employment firms that shuttle workers around the world, indifferent government officials who refuse to do anything about the situation and employers who control every aspect of these workers’ lives, including forced 13-hour work days.

One of the shipyards in Poland that employs North Koreans “cites its ‘low labor costs’ as one of the reasons it is ‘an ideal place for repairs of naval vessels for other NATO countries,’” according to Vice.

When proponents of illegal immigration and increased legal immigration into the United States argue that the globalization of the economy is inevitable, all workers should be worried. The desire for cheap labor affects wages and working conditions worldwide.

Illegal aliens and even tech workers with H-1B visas in the United States may not be treated as harshly as the North Koreans in Europe, but they, too, are paid lower than market wages and have no ability to challenge their situation unless they quit their jobs and return home.

The United States learned in the late 1800s that unregulated capital creates a smaller group of wealthy people and a large group of destitute laborers. Perhaps the greatest development in the history of the United States, the middle class, occurred after the government stepped in to ensure safe working conditions and the manufacturing class recognized that well-paid workers could afford their goods.

Testifying to Congress in March, Harvard economist George Borjas said that the only sector of the economy that benefits from illegal immigration are the businesses that hire them. Everyone else, including the workers themselves, the Americans they replace and even the consumers who buy their goods and services, loses.

The rush to globalize is predicated on securing the highest quality labor at the lowest possible cost, which increases the magnitude of immigration across the globe. Industries that used to pay well are cutting corners, hiring people at bottom dollar and treating them with contempt. This all takes place under the watchful eye of governments that can do something about the problem but are also too greedy or too willfully ignorant to stop this inimical trend.