You are at:Home»Immigration Issues»Crime»The Nation Sinks to New Lows: Dismisses Tragedy of Teenager Murdered by an Illegal Alien as “Tokenism” 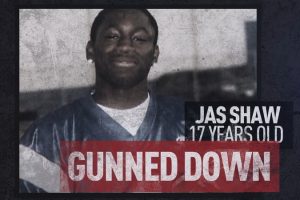 The Nation magazine makes no pretense at objectivity. It has long stood proudly and openly at the far left fringe of American politics. As such, no one should be surprised or disturbed that it takes an open-borders stance on immigration or by its vehement opposition to Donald Trump.

However, in its most recent rant on both of those topics, writer Julianne Hing stepped over the line of decency. She not only attacked Trump and groups like FAIR, she impugned the character of a murdered teenager and dismissed his father’s tireless efforts to spare other families similar grief as “tokenism.”

Jamiel Shaw Jr. was gunned down in front of his Los Angeles home in 2008 by an illegal alien gang member who had been sprung from the county jail a day earlier. “Shaw is the father of Jamiel Shaw Jr., a 17-year-old football star who was killed in 2008 in Los Angeles by Pedro Espinoza, a 19-year-old undocumented gang member who, as the popular story went, mistook the unaffiliated Shaw for a rival gang member and shot him to death. (The actual case may have been more complex.), Hing writes.”

The parenthetical hyperlink actually appears in The Nation article. The link takes readers to a 2008 Los Angeles Times article reporting on unproven allegations by Espinosa’s attorney that Jamiel Jr. was affiliated with a rival gang. The accusation was nothing more than a sleazy tactic of a lawyer trying to get his client off. No evidence was ever produced to substantiate the posthumous character assault against the murder victim. Espinosa, on the other hand, was found guilty of the murder and will be spending the rest of his life in prison.

But Hing’s assault on the Shaw family does not stop with dredging up discredited innuendo against Jamiel Jr. She goes on to accuse Jamiel Sr. of exploiting his race (he’s African-American) and his son’s death by serving as a surrogate for Trump who can get away with (in Hing’s estimation) bias against illegal aliens. “Shaw’s blackness gives him cover from accusations of anti-immigrant racism that follow Trump and his white supporters, and his awful grief laid bare chastises would-be critics into silence.” In one sentence, she manages to both label Jamiel Sr. as a shameless opportunist and assert that opposing illegal immigration is inherently racist.

From there Hing’s tone morphs from insulting to condescending. “How can anyone turn away from a father who will spend the rest of his life grieving the loss of his baby boy? The response from pro-immigration forces has never been able to meet the emotional urgency of Shaw’s arguments. Such is the power of tokenism. (Emphasis added.) Such is the power of a tragic and violent story disconnected from context about immigration and crime,” she writes.

A murdered 17-year-old and his father’s political activism on behalf of immigration enforcement are reduced to opportunistic “tokenism” because the power of the Shaws’ story (and those of many other families who have suffered at the hands of illegal aliens) stand in the way of The Nation’s dream of a nation radically transformed by mass immigration.

It’s not that The Nation (and most especially Ms. Hing) is necessarily opposed to playing on emotions when discussing immigration. Hardly a week goes by on the magazine’s website that does not include some shameless appeal to emotion featuring families “torn apart” by the “heartless” enforcement of immigration laws.

Jamiel Shaw Jr., Kate Steinle, and thousands of other victims of illegal aliens and our government’s indifference to them, are not “tokens.” They were real people with real families who grieve for them. If The Nation can’t muster a little genuine compassion for them, the least they can do is refrain from trampling on their graves.