You are at:Home»Immigration Issues»Removals of Foreign Nationals Who Overstay Visas Plummet Under Obama Administration

Removals of visa overstayers have plummeted under the Obama administration according to a House Republican who raised the issue with Department of Homeland Security (DHS) officials at a congressional hearing last week.

Rep. Lamar Smith (R-Texas), relying on data obtained by the Senate Subcommittee on Immigration and the National Interest, said the Obama administration removed approximately 12,500 visa overstayers in 2009. Last year, that number dropped down to less than 2,500 – a decrease of 80 percent. 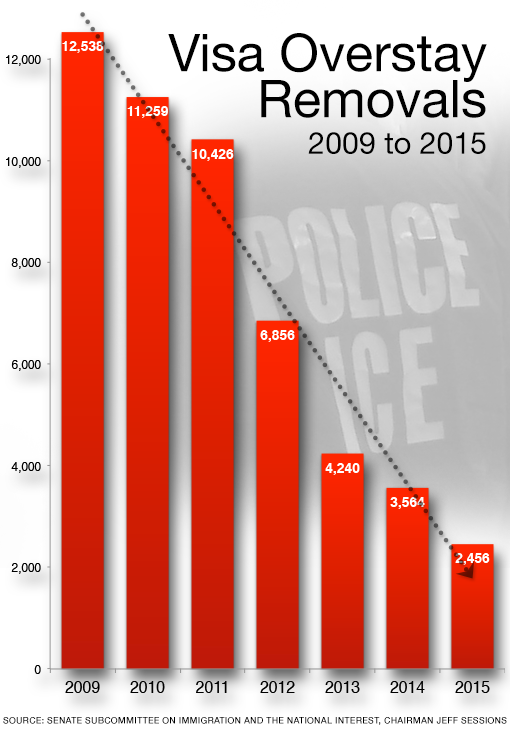 The Texas Republican estimated that removals of visa overstayers last year represented only one-twentieth of one percent of the estimated five million people who overstayed their visas and remain in the country illegally.

He continued, “You’ve got five million people now in illegal status because they’re visa overstayers. The administration [removed]2,500 of those. That’s one-twentieth of one percent. That sounds to me like an extension of the administration’s amnesty program.”

“We utilize our prioritization scheme along with the resources that we have,” Craig Healy, Assistant Director for National Security Investigations at U.S. Immigration and Customs Enforcement, said as he attempted to defend the administration’s non-enforcement agenda.

However, Smith was not satisfied by Healy’s explanation, pointing out that if the administration wanted to enforce the law against those who overstay their visas, then they would have asked for more money in their budget requests.

“I understand that, but the administration stands convicted by their own actions by the facts, why haven’t they requested more money in their budget if they wanted to send more individuals home?” he asked, “They have not requested the money sufficiently to do so.”

The administration’s unwillingness to enforce the law by allowing visa overstayers to remain in the country illegally has alarmed the American people. A poll released earlier this year indicates that approximately 3 out of 4 Americans want to remove those who overstay their visas. The same poll indicates that 68 percent of Americans consider visa overstayers a “serious national security risk.” These concerns are not unfounded, as several 9/11 hijackers overstayed their visas and terror groups around the world have recently threatened to exploit the U.S. visa program to harm Americans.

When immigration changes are proposed within the context of national security, the debate usually revolves around the issue of border control. However, gaining control over our borders deals with only part of the illegal immigration problem because it obscures the issue of the overstayers. Both Congress and the federal government must recognize that visa overstayers pose considerable national security risks and move swiftly to ensure implementation of the entry-exit tracking system that was mandated by Congress nearly twenty years ago. Until then, the administration should abandon its narrow removal priorities that exclude nearly all visa overstayers from any type of enforcement.