You are at:Home»Politics»Obama Admits He Won’t Deport Illegal Aliens 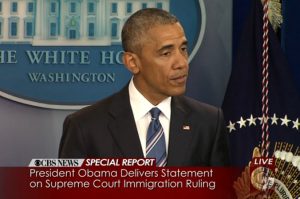 Earlier today the Supreme Court rebuked President Obama’s attempt to unilaterally grant amnesty to millions of illegal aliens when it split 4-4 in U.S. v. Texas—the 26 state lawsuit challenging DAPA and the expansion of DACA. The tied ruling keeps in place the 5th Circuits injunction blocking these programs until the courts can decide the merits of the case.

In response, President Obama just concluded a bitter press conference where he chided the outcome (a popular tactic of this president when the high court rules against him) and blamed Republicans for not passing the disastrous Gang of Eight mass amnesty bill from the 113th Congress. During a brief Q&A with the press at the conclusion of his remarks, one reporter asked the President if the outcome means he will deport the illegal aliens who cannot benefit from his executive amnesty program. Leaving little doubt that Obama refuses to enforce our immigration laws, the President blatantly said no because they do not meet his arbitrary enforcement “priorities” that exempt nearly all illegal aliens from fear of removal. It’s no mystery why the Department of Homeland Security has the lowest morale of all federal agencies when these people can’t do their job because the President has decided to disregard his duty to faithfully uphold our laws.