You are at:Home»Federal»Congress»44 Senators Vote to Protect Criminal Aliens in the U.S., Their Constituents Should Ask them Why 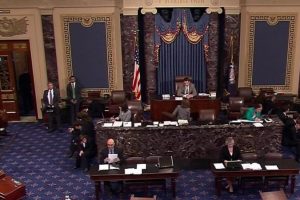 Forty-four members of the United States Senate voted Wednesday to block “A bill to ensure that State and local law enforcement may cooperate with Federal officials to protect our communities from violent criminals and suspected terrorists who are illegally present in the United States.”

The bill introduced by Sen. Patrick Toomey (R-Pa.), known as the Stop Dangerous Sanctuary Cities Act (S. 3100), failed to get the necessary 60 votes needed to bring it to the floor of the Senate for a straight up or down vote. The vote in the Senate to kill S. 3100 came one year after a seven-time convicted felon, Francisco Sanchez, killed Kate Steinle as she walked with her father along San Francisco’s waterfront. Sanchez was on that pier last July 1 precisely because of sort of dangerous sanctuary policies that are in place in San Francisco and many other jurisdictions around the country.

Here is the list of the 44 senators who killed the bill that might keep other innocent Americans from being killed by criminal aliens who roam the streets due to dangerous sanctuary policies. Perhaps their constituents should ask them why.