You are at:Home»Immigration Issues»Asylum & Refugees»Migrant Activist in Germany Lies to Police About Identity of Her Rapists to Protect Migrants From ‘Racists’ 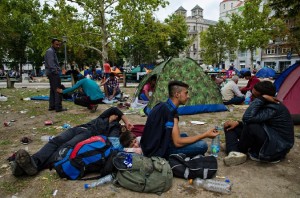 Selin Goren, a left-wing activist in Germany, really walks the walk. She is so concerned about protecting the country’s new migrants from racism that after three newcomers robbed and sexually assaulted her, she lied to the police, saying her attackers spoke German instead of Farsi or Kurdish.

Eventually, a friend persuaded her to tell the truth and according to news outlets, she penned a bizarre apology on Facebook – to her rapists. She has since removed the post, but is quoted as writing:

“what I am most sorry about is that the circumstances of the sexist and excessive actions that were done to me will only contribute to the increasing and ever more aggressive racism to which you are exposed.”

But apologizing for rapists and allowing them to perpetrate their perfidy will only spur more rapes and public opinion of migrants will plummet even more.

Why should women be forced to accommodate rapists – only migrants, of course – in a twisted sort of civil rights movement? In Sweden, the country now known as the rape capital of Europe after it opened its borders, the media and government officials routinely cover up the crimes of migrants, who flout the laws and create no-go zones for police and fire crews.

Ignoring the issue of migrant crime or consciously burying it – be it gay-bashing, child molesting or raping women – for fear of being labeled as intolerant, has done nothing to stem the rash of rapes. After the Cologne sex assault, just one of many that occurred across Europe last New Year’s Eve, authorities discouraged women from speaking out about their experiences. Migrant sexual crimes are so out of control that Germany just passed a new law to thwart it.

But anti-racists typically promote women and gay rights, so the cognitive dissonance with which they must contend on a daily basis must tear their brains apart. So they turn to choosing sides when a sex crime is committed and for Goren, who is obviously brimming with liberal guilt, racism is worse than rapists.

When the overriding concern of people is to prove that they are not racist, sexual assaults against women are considered to be collateral damage.