You are at:Home»Immigration Blog Posts»FAIR Statement on the Selection of Gov. Mike Pence as the Republican Vice Presidential Nominee 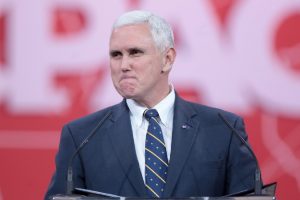 “The selection of Gov. Mike Pence as the Republican vice presidential nominee offers both some concerns and reasons for optimism to those who seek true reform that recognizes the American people as the primary stakeholder in our nation’s immigration policies.

“Throughout his public career, Gov. Pence has had a mixed record on immigration. As a member of the House of Representatives, Pence was very much a part of the Republican establishment that paid lip service to the public’s concerns about immigration enforcement, while promoting the agenda of the Chamber of Commerce. As governor of Indiana, he has had to deal with the fiscal and social costs of policies made in Washington.

Pence’s record in the House

“In Congress, Pence supported proposals to allow illegal aliens to gain legal status, even while denying that such policies amount to amnesty. During the 2007 debate on amnesty legislation, Pence originated the pointless idea of requiring illegal aliens to leave the country and then being permitted to return legally – an idea that Donald Trump has flirted with during the course of his presidential campaign.

“Pence opposed efforts to strengthen cooperation between state and local law enforcement and ICE. He also supported cuts in funding for border fencing, technology, and infrastructure.

“At the same time, during his tenure in Congress, Pence voted against the DREAM Act amnesty and generally championed measures aimed at enforcing immigration laws. There can be little doubt that opposition to amnesty and support for meaningful immigration enforcement is heavily favored by voters who propelled Trump to the nomination.

“As governor, Pence has had to deal with the effects and the costs of our nation’s failed immigration policies. He has opposed the resettlement of Syrian refugees in his state and has publicly blamed Obama administration policies for the surge of unaccompanied alien minors entering the United States. In addition, he challenged President Obama’s illegal use of executive power to grant de facto amnesty to millions of illegal aliens, joining with Texas and 24 other states in a lawsuit that blocked two sweeping Obama executive amnesty programs.

“We hope that the perspective Pence will bring to the ticket and to the White House, if elected, will reflect his experience as governor, a job that required him to deal with the burdens imposed by our nation’s failed immigration policies.”