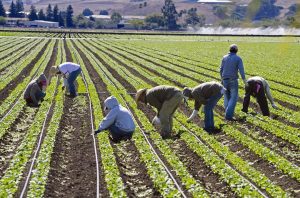 The vast majority of illegal aliens, legal immigrants and guest workers come to America understanding that they will most likely spend their time working low-paying jobs under difficult circumstances. Predatory employers know this as well and force these immigrants to work long hours for low pay without benefits.

This is a problem across the country, from east coast carnivals to west coast orchards and farms. Employees mired in the system are known as “ghost workers.” Companies provide legal and illegal workers with falsified tax documentation, either stolen or counterfeit, while others readily accept whatever papers workers provide them.

Employing illegal aliens under false documentation allows companies to manipulate laborers who willingly work for very little. But it also proves profitable to hire American citizens as ghost workers since the employer can bypass federal and state workforce laws like mandatory overtime compensation.

Melon and corn farmers in central California are prime offenders, and use ghost workers to disguise their practice of hiring illegal aliens. The workers are then forced to work long days in excessive heat and poor conditions, making this a profession with the highest rates of heatstroke and chronic illness of any industry.

Participating in the ghost worker practice requires myriad criminal acts.. Aside from the initial illegal border crossing, the laborers and businesses engage in identity theft—a federal crime—along with workforce violations like a lack of proper insurance and safety practices that run afoul of the Fair Labor Standards Act. According to a recent report by University of Colorado professor Sarah Horton, these companies take advantage of the fact that their employees are committing identity theft to “deliberately manipulate their workers’ position of legal compromise in order to suppress WCI [Workers Compensation Insurance] claims.”

Another troubling practice the Horton study discovered is that many of these businesses also use the ghost worker avenue to abuse child labor laws. The work schedules for minors in California fields “routinely exceeds [the legally allowed maximum of]48 hours [per week],” yet companies avoid paying them overtime by having them work one or two days per week under another person’s Social Security number.

Horton identifies this practice as the “two-identity system.” These minors are not only working in one of the most dangerous professions in America, they are receiving unfair wages for that work. However, since most of these youths are illegal or have few other employment options, they subject themselves to this employer abuse to avoid the prospect of becoming jobless in a foreign land.

Illegal immigration creates a domino effect where many other crimes follow. Accepting the unlawful act of illegal immigration means that government officials must also avert their eyes when other crimes are committed as a direct result. This creates an unjust system where it’s acceptable to ignore the crimes of illegal immigrants and the companies that employ them, while others are punished severely—identity theft carries a punishment of up to 15 years in prison when applied appropriately. Such disrespect of the law only emboldens businesses that willfully take advantage of their employees.

As long as immigrants continue coming into the country illegally and willingly work in dangerous conditions, predatory businesses will bend or break the law and abuse their workers to make easy money. Strong E-Verify laws and vigorous enforcement of our existing laws can help stem the illegal practice of utilizing ghost workers. But unless these common-sense measures are complemented with a secure border and severe punishments for companies that knowingly help illegal aliens commit identity fraud, the practice will remain a blot on America’s reputation.