You are at:Home»Immigration Blog Posts»Build a Border Wall? Food for Thought 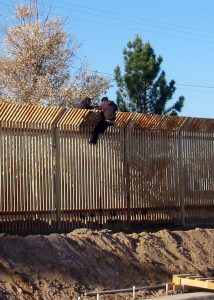 With all the discussion of a border wall in the presidential campaign, a couple of simple facts have been ignored.

First, fencing already exists in the most crossed sections of the border. So the issue is to what extent fencing should be expanded and/or made less permeable. There is already a congressional mandate to expand the fencing and to make it double fencing (The Secure Fence Act of 2006), but that mandate has not been funded and has thus been ignored.

Second, fencing or a wall wouldn’t halt illegal immigration from the current influx of illegal unaccompanied minors from Central America. Those illegal entrants are already happily turning themselves over to the Border Patrol (BP) because they know that the BP is under orders to turn them over to the Office of Child Services of the Department of Health and Human Services (HHS). HHS not only has a mandate to house and feed them, but also provides transportation to the home of the illegal alien minor’s parents or other caregiver in the United States. Why would an illegal alien minor try to evade the BP if the red carpet treatment is available when they turn themselves in?

The next question is whether a wall would change this specific situation. The unfortunate answer is no, because the Central American illegal alien minor could just as easily go to a legal port of entry and ask the Customs and Border Protection officer for asylum. Many are already doing this. Our immigration court system has become so backlogged (about half a million cases are currently pending) that a request for asylum simply puts the illegal alien into a queue that stretches for years before a deportation  can be issued.

So, what can be done? A wall or more fencing has a role to play in combating smuggling and some illegal entry as well as for enhanced national security, but it is only one step of a full solution to illegal immigration. Instead of treating the wall as a cure-all, the U.S. has to begin rapid repatriation (deportation) for all illegal aliens who do not immediately present a prima facie case that they have a well-founded fear of persecution if they were sent home. This is the solution that slowed the illegal arrival of Cubans; after they became subject to such screening if their boat was stopped the numbers intercepted by sea dropped.

It is obvious from the actions of the Obama administration that this suggested solution is anathema currently, and the same may hold if Secretary Clinton steps into the Oval Office.