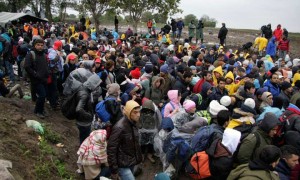 Recognizing there are about 170 days left of the Obama administration, reporters, almost from the word “go,” prodded Department of Homeland Security (DHS) Secretary Jeh Johnson about the administration’s immigration policy at a recent breakfast hosted by the Christian Science Monitor.

The first immigration question Johnson fielded pertained to the immigration case recently lost by the administration. In this case, the 9th Circuit Court of Appeals determined that children could not be detained even if they were accompanied by their mother or father. As expected, instead of bolstering immigration enforcement to deter unaccompanied minors (UAMs) and their families from crossing the border, Johnson hinted the administration will “review its policies” in light of the 9th Circuit ruling.

Additionally, Johnson was questioned about refugees being resettled in American communities, in light of recent terrorist attacks in Orlando and San Bernardino. Johnson stated that President Obama’s goal to resettle 10,000 refugees this year in the U.S. will be met. He claimed that the administration is not short-changing the process but thoroughly vetting each refugee before they are resettled and these refugees are only placed into communities that want them and can absorb them into their population.  While giving a seemingly straightforward response on the matter, Johnson did not address why 75 refugees were resettled in New Jersey despite Governor Chris Christie’s objections.

Johnson hemmed and hawed a bit when asked whether DHS would push the State Department to impose visa sanctions on countries that do not repatriate its citizens. Currently, there is a bipartisan push on Capitol Hill for sanctions against countries that won’t take back certain criminal aliens.

At times, Johnson talked out of both sides of his mouth. He said that the administration could not stop “removals,” noting that the alternative, open borders, would result in a surge of illegal aliens. At the same time he supported President Obama’s policies that encourage illegal aliens from Central America to come across our southwestern borders. He praised President Obama’s recent expansion of the Central American Minors (CAM) Refugee/Parole Program.

Johnson’s responses to the immigration questions posed at this event clearly reflect the administration’s position to not seriously enforce our immigration laws and instead highlight our dysfunctional immigration system.