You are at:Home»Immigration Blog Posts»A Newspaper Editorial Sums Up The Importance of the Leaked Soros Documents

(Hint: It’s not an American Publication) 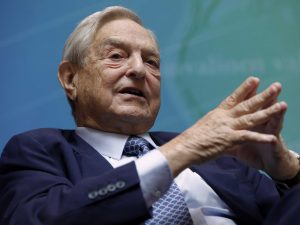 Last week, hackers leaked thousands of pages of documents revealing the political agenda and the tactics of billionaire hedge fund manager George Soros’s Open Society Institute (OSI). On Monday, FAIR published a brief synopsis of a few of the documents we have reviewed that detail Soros’s efforts to manipulate U.S. immigration policy. There are many more we have not yet reviewed.

Sadly, but not surprisingly, the leaked OSI documents have been largely ignored by the mainstream media in the U.S. But one foreign publication, The Jerusalem Post, has taken a close look at what is in this trove of documents. In an editorial, the Post wrote about the sinister nature of Soros’s attacks on national sovereignty in the United States and throughout the West, and how immigration is at the core of his efforts.

The following excerpts from the August 22 editorial eloquently sum up what is at stake in our fight for true immigration reform:

…Then there are Soros’s actions on behalf of illegal immigration. From the US to Europe to Israel, Soros has implemented a worldwide push to use immigration to undermine the national identity and demographic composition of Western democracies. The leaked emails show that his groups have interfered in European elections to get politicians elected who support open border policies for immigrants from the Arab world and to financially and otherwise support journalists who report sympathetically on immigrants.

Soros’s groups are on the ground enabling illegal immigrants to enter the US and Europe. They have sought to influence US Supreme Court rulings on illegal immigration from Mexico. They have worked with Muslim and other groups to demonize Americans and Europeans who oppose open borders.

In Israel as well, Soros opposes government efforts to end the flow of illegal immigration from Africa through the border with Egypt.

The notion at the heart of the push for the legalization of unfettered immigration is that states should not be able to protect their national identities.

The thrust of Soros’s efforts from Ferguson to Berlin to Jerusalem is to induce mayhem and chaos as local authorities, paralyzed by his supported groups, are unable to secure their societies or even argue coherently that they deserve security…