You are at:Home»Immigration Blog Posts»#NPS100 – America’s National Parks Under Assault by Smugglers 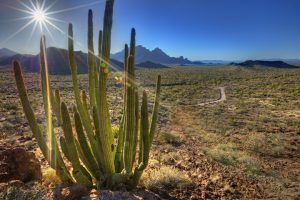 America’s national parks represent a tremendous accomplishment for conservation. Whether they will still represent that 100 years from now is an open question, given the embrace of mass immigration by the same elites that once made preservation of wild open spaces a priority.

The first casualty of our lack of serious immigration policy has been National Parks, National Forests, and National Monuments along our southern border. From the early 2000s on, these federal lands became smuggling routes for a flood tide of drugs and illegal immigrants.

The remote and rugged nature of these areas lend themselves to smuggling operations; and as a result they have become the preferred route for human and drug traffickers seeking a way around tougher border enforcement  in California, where sections of a completed border fence made smuggling too difficult.

Ten years ago the Economist noted that smuggling was a serious problem in these ecologically delicate areas:

Rangers must worry not only about rescuing lost hikers and conserving nature, but also about security. Elsewhere in Texas, officials at Padre Island National Seashore, working with the Coast Guard and other agencies, seize about 25,000lb of marijuana each year from incoming boats.

The worst-hit place is Organ Pipe Cactus National Monument in Arizona, which is part of the parks system. In 2002 a young ranger on patrol there was killed by drug dealers.

In 2009, the Center for Immigration Studies publicized the results of putting cameras along smuggling corridors through Coronado National Forest, situated in remote Southeastern Arizona. As a result, Republican members of Congress wrote a letter to the DHS that said in part:

Comprised of wildlife refuges, national parks and national forests, these lands represent some of the most culturally and environmentally sensitive areas in the country. Due to their sparse population, lack of development, and location on the border, these lands often serve as gateways for illegal aliens, smugglers, and possibly terrorists to enter the United States.

Given the magnitude of our underlying concerns, we are writing to request information relating to agreements between DHS and Department of the Interior agencies and the U.S. Forest Service. In particular, we respectfully request information concerning USBP access to lands under the jurisdiction of these agencies, including USBP’s ability to patrol these areas and install important surveillance and communication equipment.

The response at the border, in particular the buildup of resources in certain areas of Arizona and New Mexico, shows that given the resources, the border can be secured.

Recent reports from this year indicate that in response to increased Border Patrol presence, parks and wilderness areas are now much safer than they were before.

Caution: “Smuggling and illegal immigration may be encountered in this area.”

Visitors to state and national parks, monuments and memorials in Southern Arizona have undoubtedly seen these signs posted along popular hiking trails. The sites near the Mexico border are great spots to find hiking, bird watching and camping, but also provide the perfect place for undocumented immigrants and drug smugglers to cross into the U.S.

“Visitors don’t often see it because (immigrants) try to avoid established trails and they usually travel by night,” said Christopher Bentley, park ranger at the Coronado National Memorial near Sierra Vista, which is only open during daylight hours.

According to Bentley, safety has improved drastically since 2003, when Coronado was named one of 10 deadliest U.S. parks by the Fraternal Order Police’s park ranger association.

The impact of increased patrols, manpower and fencing in securing these national resources shows that actually enforcing our border protects the environment, contrary to claims by some environmental groups that fencing and patrols would harm these areas.

However, despite increased patrols in high visibility areas like national parks, there has been a consistent diminishment in enforcement in most places along the border that threatens local ecologies and long-term environmental sustainability.