More than a month ahead of schedule, the Obama administration met its self-imposed goal of admitting 10,000 Syrian refugees into the U.S. this fiscal year.

Admissions vastly spiked in May, after the U.S. increased the number of processing centers in key Middle Eastern locations such as Jordan, Turkey, and Lebanon to expedite the refugee vetting process by their September 30 deadline. To be exact, the U.S. “vetted” and admitted more than 8,000 refugees between May and August.

With an entire month left to go in the 2016 fiscal year, the administration will likely go well over its 10,000 quota. Indeed, less than 24 hours after announcing it reached its goal, State Department data reveals that the administration has already admitted 10,177 Syrian refugees. 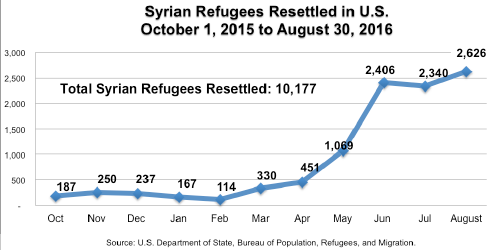 So, with the promised 10,000 Syrian refugees already admitted into the country – and potentially more on their way – many Americans are left wondering where all of these individuals are being placed. Data sourced from the State Department’s Refugee Processing center reveal Michigan and California as the top two receiving states for Syrian refugees admitted to the country, making up roughly 20 percent of all admissions. Furthermore, the same data show that the top 10 states receiving the most refugees account for 66 percent of all Syrian placements thus far. 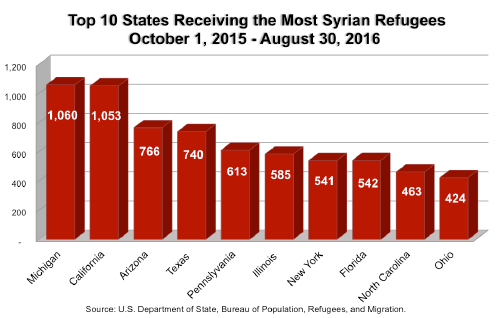 Despite meeting its goal ahead of schedule, the Obama administration continues to push for more Syrian refugees. White House spokesman Josh Earnest said that the 10,000 figure was nothing more than a “compromise” and that President Obama would like to increase that number by “a few thousand more” next fiscal year. Even if he is no longer in office, President Obama may get his wish if Hillary Clinton if elected, as she has announced her support for admitting 65,000 Syrian refugees annually.