You are at:Home»Immigration Blog Posts»The Message We Send 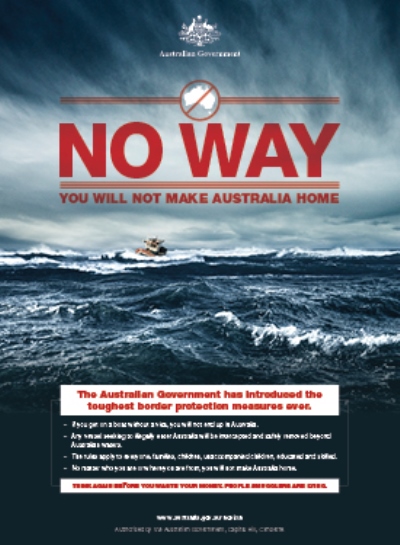 In 2014, the Australian government launched a border control campaign dubbed “Operation Sovereign Borders.”  As part of this campaign, it issued posters, printed in seventeen languages (including Arabic, Dari, Farsi, and Urdu), depicting a ship on storm tossed waters, bearing the legend “No Way: You Will Not Make Australia Home.”

Subsidiary text notes, “If you get on a boat without a visa, you will not end up in Australia.” Aimed at Middle-Eastern migrants who cross the Indian Ocean to reach Australia, the posters represent a firm departure from political correctness and an acknowledgment that illegal migration has a direct effect on both sovereignty and national security.

Although the Australian government has not released figures showing the cost of the Sovereign Borders media campaign, it certainly spent significantly less than the millions the U.S. expends annually on ineffective border enforcement.  Should U.S. immigration authorities should borrow a page from the Australian playbook and launch a pro-enforcement media campaign directed at the southern border?

The United States has previously attempted pro-enforcement media campaigns. But they were neither extensive, nor coupled with the type of decisive action to which Australia has committed. Instead, the U.S. has consistently combined lax enforcement with a clear message that there are few consequences for violating immigration laws. Rather than a rapid return to their nation of origin, illegal aliens who cross into the United States can find work and government-sponsored protection in sanctuary cities.