Monday afternoon, Donald Trump Jr. did something all campaigners do: he used an analogy to make a point. The son of GOP candidate Donald Trump used an easy to understand metaphor to visualize the risks associated with floods of refugees entering the United States from terrorist-infiltrated countries without a proper vetting process in place. 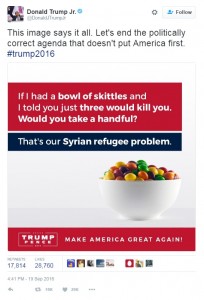 However, instead of focusing on the message conveyed in the tweet – that unvetted refugees pose a threat to the safety of American citizens – open border proponents and the mainstream media instead focused on the metaphor. USA Today condemned the “Skittles” comparison by posting a story about a young refugee who wanted to become a pilot. The Washington Post joined the fray as well, countering the tweet by promoting a skewed report by the libertarian Cato Institute, a think-tank that promotes open borders.

As the metaphor suggests, the majority of refugees are likely harmless, not unlike the popular rainbow-colored candy. But the “poisoned skittles” – terrorists and criminals who maliciously insert themselves into the mass of incoming refugees – pose a much higher threat to the average American citizen than the one in 3.64 billion chance The Washington Post wants you to believe. In Germany last year, refugees were responsible for 1,688 “cases of sexual offence,” including more than 450 rapes. Assaults, robbery and other “offences against personal freedom” totaled 36,010. There were also 85,035 charges of misdemeanor theft attributable to refugees.

Germany housed approximately 1.1 million refugees and asylees in 2015. So by these numbers, approximately 3.4 percent committed a major crime that severely injured another person. If you include the lesser charges of theft, that total comes out to 11.2 percent. In total, these stats indicate that nearly one in 750 Germans were impacted by crimes committed by a refugee.

With 3.4 percent of refugees to Germany committing felonious crimes, Trump Jr’s analogous concern is accurate. Americans have to decide if such a ratio is a risk they are willing to accept. Currently, the federal government is not properly vetting most refugees, so the criminals are not being separated from the other migrants. But even if officials decided vetting was a priority, as it should be, United States Citizenship and Immigration Services has insufficient access to the necessary information and documents needed to complete thorough background checks.

Open-border proponents and their media lackeys understand these statistics, which is why they attack the presentation of the problem and ignore the message. Germany’s unchecked refugee system is what the current administration wants to implement in the United States, so they want American citizens to be blinded to the risks associated with such a policy.