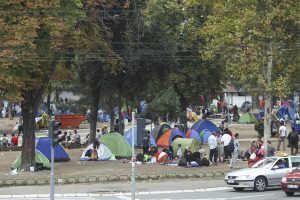 The city of Flint, Michigan, which garnered national attention this year for its lead-contaminated water, may once again find itself in crisis mode if refugee resettlement contractors in the state get their way.

According to Breitbart News, mid-Michigan refugee contractors are planning on resettling 100 Syrian and Iraqi refugees in FY 2017 in Flint without the knowledge of local officials. “At this point it appears city leaders have not been informed of the details regarding this matter,” a spokesperson for Mayor Karen Weaver and the city of Flint told Breitbart.

A review of refugee resettlement data from the Department of State reveals that over the course of the last 10 years, a mere eight refugees have been resettled to the Flint area; four in FY 2011 and four in FY 2013 to be exact. This hardly makes Flint an obvious choice for resettling 100 additional refugees seeking to call the U.S. home. To the contrary, it seems rather irresponsible to place refugees in a city that is already trying to recover from its own public health and financial emergencies.

By now everyone in America has heard of Flint’s water crisis, where residents in this largely low-income and working class community were poisoned by high levels of lead in their drinking water. Though federal officials reported earlier this summer that it was now safe to drink “properly filtered water,” some homes are still reportedly unable to have proper systems installed, requiring many residents to continue to rely on bottled water.

Moreover, the city of Flint has only recently come out of its financial emergency. From December 2011 to April 2015, Flint was so plagued with financial problems that they were placed under state receivership. Nearly four years and four emergency managers later, the city is on the road to being debt free for the first time in a decade. While efforts to put Flint back on track should be commended, they should also not be pushed during its recovery period by flooding the city with individuals who will heavily rely on government assistance.

Needless to say, it is reckless and negligent to both prospective refugees and current residents to so drastically increase the number of refugees going to the area when the city of Flint has hardly had an opportunity to get back on its feet. Instead of setting unsuspecting refugees up for potential failure by resettling them in an area with well-documented public health and financial problems, refugee contractors and their parent agencies should place time and effort helping preexisting communities recover.

Flint Michigan refugees
Previous ArticleWhich Story Do You Want to Read?
Next Article Some Sanity in Temporary Protected Status