You are at:Home»Immigration Issues»Border Security»The Fruitlessness of the “Fruitless Wall” Argument 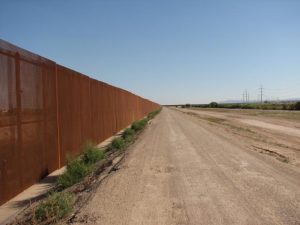 The current presidential campaign has sparked significant discussion about border walls. Time Magazine ran an article entitled “This Is Why Border Fences Don’t Work.” Politico ran an analogous feature called “The World Is Full of Walls That Don’t Work.” There are literally hundreds of pieces making similar claims. What is the basis for these assertions?

The “fruitless wall” argument is usually perched atop a single faulty premise: A false comparison with allegedly failed historical border partitions. These arguments are as conceptually foolish as they are historically erroneous. Almost always, the barriers being referenced weren’t constructed to control immigration. And all served their intended purpose for an extended period. What’s usually classed as “failure” of the barrier is really an event of epic historical proportions like the collapse of an empire or the fall of communism.

The Ming Dynasty’s “Great Wall” was never intended to serve as a border barrier but as a fallback position for Chinese military forces operating outside the wall. It was only breached when the treasonous Ming general Wu Sangui opened the gates and let in the Manchu. Although the Manchu expanded Chinese borders beyond the wall, they maintained it, rather than tearing it down.

Evidence indicates that Hadrian’s Wall was not intended to repel anyone. Rather, it appears to have been part of the Roman customs system. Its gates, like modern toll booths, were used to collect duties. It seems to have worked. History is replete with complaints from Briton and Celtic merchants about Roman taxes.

Rarely mentioned by commentators are Israel’s border fences. Perhaps their purpose has been too clear and their success too demonstrable: They were constructed specifically to secure and monitor Israel’s West Bank and Gaza boundaries with the Palestinian Authority. Upon construction of these double-layer security fences, Palestinian terrorist attacks dropped over ninety percent because the bulk of terrorists were denied access to Israel’s territory.

While no barrier can be one hundred percent effective, the “Fruitless Wall” argument doesn’t stand up to scrutiny. Israel’s fences demonstrate that border barriers are an effective form of immigration control.  If the U.S. wishes to secure its southern border, it must complete the double-layer security fence mandated by Congress in 1996.