You are at:Home»Immigration Issues»Asylum & Refugees»Nearly 300 Refugees in Minnesota Diagnosed with Active TB

Records from the Minnesota Department of Health show that 296 refugees have been diagnosed with tuberculosis (TB) between 2010 and 2014. Of the 296 refugees, 71 refugees were diagnosed within just a year of their arrival to the United States.

The total of refugees with active TB nationwide is likely to be much higher than reported. Currently, there are 468 known cases of refugees with active TB in the country, but 36 states have not submitted any data regarding the number of cases within their refugee populations. Additionally, the Minnesota Department of Health suggests that the state’s numbers are higher than others because, unlike many other states, Minnesota conducts additional health screening within 90-days of a refugee’s arrival.

Federal law prohibits refugee applicants with active infectious TB from entering the country. However, some refugees were able to enter the United States with the contagious disease by receiving a waiver by the U.S. Department of Homeland Security (DHS) for their admission. DHS has not made public the number of TB and other disease-related waivers it has issued in recent years. 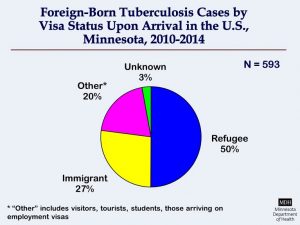