You are at:Home»Immigration Issues»Asylum & Refugees»50 Years of Special Treatment for Cubans 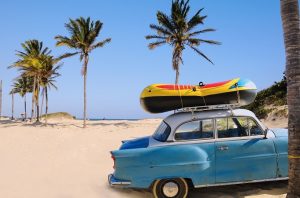 Today marks the 50th anniversary of the Cuban Adjustment Act, a Cold War-era law that provides immigration benefits to Cuban migrants not offered to citizens of any other country.

Specifically, the Cuban Adjustment Act (CAA) allows Cuban citizens or nationals who reach the United States, regardless of whether they have done so legally or illegally, to remain and adjust to permanent resident status after one year. According to the “wet foot/dry foot” policy, which was adopted as part of a 1995 revision of the CAA, all Cubans intercepted at sea en route to the U.S. are repatriated (“wet feet”), while those who step on American soil (“dry feet”) are eligible for preferential treatment. In addition, under the Refugee Education Assistance Act, Cubans are the only immigrant group with immediate access to federal benefits because they are presumed to be refugees.

The foreign ministers expressed concern about the negative effects of U.S. immigration policies across the region. “The 1966 U.S. Public Law 89-732, known as the ‘Cuban Adjustment Act’, and the policy commonly known as ‘wet foot/dry foot’ have encouraged a disorderly, irregular and unsafe flow of Cubans who, risking their lives, pass through our countries in order to reach the U.S.,” the letter reads. They go on to add that these policies have created a serious humanitarian crisis for Cuban nationals seeking to reach the United States. “These people, often facing situations of extreme vulnerability, fall victim to mafias dedicated to people trafficking, sexual exploitation and collective assaults. This situation has generated a migratory crisis that is affecting our countries.”

The foreign ministers’ concerns are not unfounded. As relations between the United States and Cuba continue to normalize, a feared end to the special immigration status and generous benefits bestowed on Cubans is driving a new wave of illegal Cuban migration. According to U.S. Customs and Border Protection statistics compiled by the Pew Research Center, 43,159 Cubans entered the United States in Fiscal Year 2015, an amount nearly double that of the previous year. The influx shows no signs of slowing, as 46,635 Cubans entered the country in the first ten months of Fiscal Year 2016 – already surpassing full Fiscal Year 2015’s total.

After acknowledging receipt of the letter, the Obama administration made it clear that it does not plan on changing the migratory status of Cubans even though diplomatic relations are being reestablished with the island nation. “We continue to encourage all countries to respect the human rights of migrants and asylum seekers, and to ensure that they are treated humanely,” State Department spokesman John Kirby told reporters. “The Cuban Adjustment Act remains in place and ‘wet foot, dry foot’ remains U.S. policy regarding Cuban migration.”

Even though the administration is uninterested, there is a bipartisan effort in Congress to reform the Cuban immigration policies that are unfair relics of a bygone era. Congressmen Henry Cuellar (D-Texas) and Blake Farenthold (R-Texas) have introduced legislation to ensure that Cubans are treated under the same immigration policies as citizens of other counties with which the United States has diplomatic relations. Their legislation, H.R. 4847, the Correcting Unfair Benefits for Aliens (CUBA) Act of 2016, does the following:

The bill repeals the Cuban Adjustment Act and subsequent “wet foot/dry foot” policy. The Cold War-era Cuban Adjustment Act allows Cuban citizens or nationals who reach the United States, regardless of whether they have done so legally or illegally, to remain and adjust to permanent resident status after one year.

The bill prevents the use of funds to implement or administer the Cuban Family Reunification Parole Program (CFRP). Created by a policy memorandum in 2007, the CFRP allows eligible U.S. citizens and lawful permanent residents to apply for parole for their family members in Cuba. Once in the United States, CFRP beneficiaries may apply for work authorization while they wait to apply for lawful permanent resident status.

To address rampant abuse of taxpayer dollars, the bill amends the Refugee Education Assistance Act, the Personal Responsibility and Work Opportunity Act, and the Immigration and Nationality Act to terminate the automatic eligibility for federal benefits for Cuban nationals under the Refugee Resettlement Program.

Since many people are living in Cuba and still collecting federal benefits such as Supplemental Security Income (SSI), the bill would require the Social Security Administration Officer of the Inspector General to submit a report to Congress on how it is enforcing the regulatory provision that prevents anyone from collecting SSI benefits while living abroad.

While this legislation does not address repatriation of criminal aliens or the annual allocation of visas, it effectively addresses the most egregious policies that provide immediate amnesty to Cubans and rob American taxpayers of billions. Enactment of this legislation would stop the influx of Cubans at the southern border by eliminating outdated policies that incentivize migration, save billions of dollars, and restore a level playing field for those who seek to enter the country. For these reasons, FAIR strongly urges passage of the CUBA Act.

A complete bill summary can be found here.