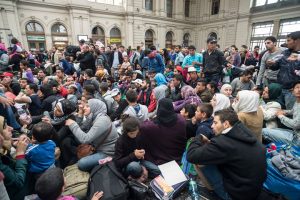 In the U.S., an adult marrying a child is a crime, and often involves additional serious offenses like statutory rape – a felony crime punishable by 20 or more years in prison. Arranged marriages aren’t permitted by any state in the United States as it offends the very foundation of personal liberty. Prosecutors and law enforcement officers assigned to child exploitation task forces spend their entire careers trying to protect the victims of child marriage and sexual abuse. In the nonprofit sector, organizations like “Girls, Not Brides” offer public education programs on forced marriage and provide services to targets of this illicit practice. Likewise, child marriage is viewed as a pernicious form of abuse in other developed Western nations. Unfortunately, that is about to change in one country: Germany

Germany is accepting millions of refugees from nations that commonly practice child marriage, like Afghanistan and Syria. But instead of expecting refugees to adapt to Western standards, the nation is engaging in reverse assimilation by changing their laws and customs to accommodate these migrants. Germany has an established body of law, including a free and fair judicial system. But that legal system will be useless to the victims of child marriage if the Federal Republic legalizes the practice. Unfortunately, this absurdity is emanating from the top echelon of the German government. Aydan Özoguz, the country’s Commissioner for Integration, has argued that “a blanket ban on marriage between minors is perhaps well-intentioned, but in individual cases can also lead to women’s social exclusion.”

Commissioner Özoguz misses the point. Western law imposes a blanket ban on marriage between minors, and on marriage between minors and adults, because it considers it abusive and immoral. Women in advanced and industrialized democracies experience the least social exclusion of any female population anywhere in the world thanks, in large part, to forbidding such customs. The entire point of a nation accepting refugees is to offer respite from the oppressive and dangerous conditions in their home countries. This purpose is defeated when the host country offers to adapt to the failed traditions and policies of the country that refugees are leaving.

The symptoms of cultural disruption occurring in Germany may be a part America’s future. Just months ago, outgoing President Barack Obama went  on record saying he is “proud” of Prime Minister Angela Merkel for her mass-acceptance of refugees. “She is giving voice to the kinds of principles that I think bring people together rather than divide them.”  But giving up the legal principles on which Western Civilization is founded can only divide. And President Obama’s decision to admit 100,000 refugees to the U.S. in fiscal year 2017 – with at least 10,000 of them from Syria – could be just as divisive if he follows Germany’s policy lead.

Promoting German immigration policies means accepting the risks and demands that come with them. The outgoing administration made very few efforts to vet refugees from countries where terrorist organizations flourish, and does not appear to have adopted any real strategy to deal with practices like child marriage. The United States has been one of the most politically stable nations in the world for the last two and a half centuries. This is largely due to its adherence to the rule of law and its constitutional concepts of equality under the law.

President-elect Donald Trump must decide if he wants to continue taking the United States down a road like Germany and allow our own laws and cultures to be undermined by adopting those from failing nations. If he does, how long will it be before we begin to fail as well?