You are at:Home»Federal»The DACA Pardon Issue is Finally Laid to Rest 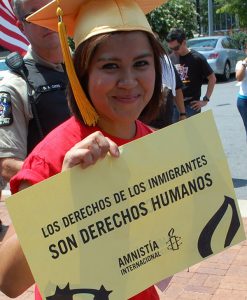 Once the shock from Donald Trump’s surprise presidential victory wore off, open borders groups and illegal aliens began scrambling for ideas to keep DACA individuals in the country. The panic was unsurprising because President Obama unilaterally created DACA meaning his unconstitutional executive action had no basis in law and could be immediately nullified by a future president—a point Obama repeatedly acknowledged. What is surprising is the absurd “answer” these groups came up with: Obama should pardon the approximately 750,000 DACA recipients.

Any attorney worthy of the degree hanging on his/her office wall could immediately tell you this is not a viable option. First, the pardon power is limited to criminal offenses, not civil offenses which immigration violations are. FAIR’s Research Director Matt O’Brien pointed that out last week. More importantly, even if Obama could pardon DACA recipients it absolutely would not put them on a path to citizenship as amnesty advocates claimed. Indeed, all a presidential pardon would do is forgive an illegal alien’s unlawful presence. The individual would still have no legal status to remain in the country and would revert back to being an illegal alien if they failed to return home within the set grace period. In fact, the only benefit a hypothetically-pardoned DACA recipient could receive is the waiver of the 3/10 year bars which would not be triggered upon departure because the pardon removed the unlawful presence.

Much to the dismay of pro-amnesty Rep. Luis Gutierrez (D-Ill.) and illegal alien interest groups, the Obama administration has finally come out and said what was obvious to so many of us. In a podcast interview, White House Domestic Policy Director Cecilia Munoz said, “I know people are hoping that pardon authority is a way to protect people. It’s ultimately not, for a couple reasons. One is that pardon authority is generally designed for criminal violations, not civil. But also it doesn’t confer legal status. Only Congress can do that. So ultimately, it wouldn’t protect a single soul from deportation.”