You are at:Home»Immigration Issues»Border Security»Fake U.S. Embassy in Ghana Sold Usable American Visas for Over a Decade 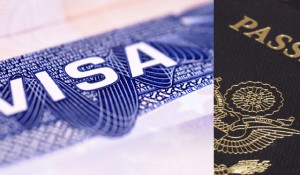 Remember those spam emails from the supposed Nigerian or Ghanaian princes who desperately needed you to babysit tens of millions of dollars for them? You were their last hope, so they were perfectly willing to let you spend a couple million so long as you paid for all the “taxes and fees” so that the “money transfer” could take place? Hopefully you were never a victim of one of these schemes. However, that same scammer may very well be able to provide you with an authentic U.S. visa thanks to the nearly non-existent preventative measures currently in place to combat document fraud.

Over this past weekend, authorities in Ghana busted a fake U.S. embassy that has been pumping out fraudulent American documents, like visas and birth certificates, for the past ten years. The fake diplomatic outpost in Accra, Ghana, advertised their services in nearby cities and countries and took only scheduled appointments, booking customers into nearby hotels for the duration of the transaction. The entire process cost $6,000 per document – a bargain for those hoping to gain admission to the United States.

A reliable estimate has not yet been established, but it appears the fraudulent operation successfully helped a significant number of Africans migrate illegally to the U.S. The fraudsters conducted this illegal business in broad daylight, operating in a building complete with American flags and a picture of President Barack Obama in the waiting room.

The Obama administration not only promoted, but celebrated years of non-enforcement policies. The result is that U.S. immigration officials lost support needed to detect and stop dangerous international operations like what occurred in Ghana – the forging and selling illegal documents over the past decade.

Visa crime is especially dangerous to American citizens. The illegal immigrants who obtain these documents are not subject to background checks or any other form of vetting. Once they arrive on our shores, they simply blend in with legitimate citizens and legal permanent residents in most cases. Unless they come to the attention of law enforcement for committing a crime, it is virtually impossible to track down illegal aliens with fraudulent documents.

Visa fraud is just one of numerous immigration-related issues that the incoming Trump administration must address. FAIR recently provided the President-elect’s transition team with a document detailing the country’s most pressing immigration-related issues, along with recommended actions. Protecting the lives and interests of American citizens starts with addressing the long-neglected problems related to immigration enforcement – like document fraud – and ensuring that those who enter the United States have the proper authorization to be here.