You are at:Home»Immigration Blog Posts»Puzder is Going to Have to Do Better 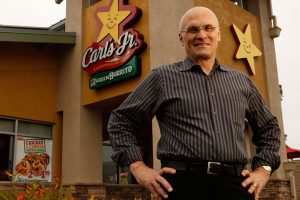 The nomination of Andrew Puzder to serve as Secretary of Labor has been greeted with skepticism from a variety of public interest groups, including FAIR. Puzder is CEO of CKE, a fast food conglomerate that is a major player in an industry with a history of exploiting workers and abusing immigration laws designed to protect American workers.

Over the weekend, Puzder sought to allay concerns about his qualifications for the job. Interviewed by Real Clear Politics, Puzder tried to defend his past record by essentially asserting that, ‘that was then and this is now.’ “My job as a business person is to maximize profits for my company, employees and shareholders. My job as the Secretary of Labor, if confirmed, is to serve U.S. citizen workers – that is my moral and constitutional duty,” he said.

True, the job of any CEO is to watch out for the bottom line of the corporation he or she is running. But that does not mean that anything goes. Exploiting workers, employing illegal aliens, or using guest worker programs to suppress wages and working conditions in an effort to maximize profits cannot be justified. There are all sorts of labor, environmental and other practices that we demand of corporations because they advance the public good, even though they cut into profit margins.

Puzder goes on to offer the very carefully worded pledge, “I will not provide guest worker visas to companies that break the rules, and will support reforms to raise wages for Americans — I know the system from the inside, and will be the best champion American workers have had.” What he carefully avoids noting is that in many of the most egregious cases in which employers have used guest workers in lieu of, or to replace American workers, the companies were not violating any rules; they were violating the public trust.

The rules governing the guest worker system (that Puzder knows from the inside) are rigged to benefit companies like the one he ran. As such, his biggest challenge as Labor Secretary won’t be punishing employers who break the rules, but rather changing the rules that allow unscrupulous employers to choose cheap foreign workers over American labor.

If he survives the confirmation process, Puzder will need to show the American people that ‘that really was then’ and that he truly will be the born-again champion of the American workers he claims to have become.