You are at:Home»Immigration Blog Posts»USC Professor Bans Use of Word “Illegal Immigrant” on Final Exams 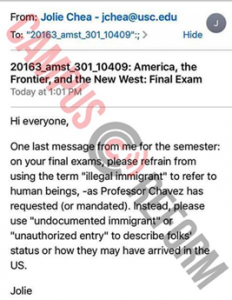 In its mission statement, the University of Southern California (USC) proudly boasts that it is “unfettered by political control” and “strongly committed to academic freedom.” However, this mission statement seems to only apply to those who are willing to follow a certain politically correct orthodoxy. Campus Reform is reporting that American Studies professor Alicia Chavez had her teaching assistant instruct students to “refrain from using the term ‘illegal immigrant’ to refer to human beings, as Professor Chavez has requested (or mandated).”

American universities used to be places that fostered and encouraged debate from a variety of perspectives. No longer. Instead, students are must accept faculty indoctrination or else risk a failing grade. In today’s university, respecting “safe spaces” and using politically correct terminology are becoming requisites to remain in good standing.

“Illegal alien” is a factual and accurate description of foreign nationals who violate U.S. immigration laws when entering the country. It is a legal term of art referenced in legal dictionaries and is commonly used throughout immigration-related legislation. In contrast, referring to illegal aliens as “immigrants” is factually incorrect. “Immigrant” is also a legal term, but it refers specifically to those who have been granted authorization to reside permanently within the borders of the United States. So, essentially, one of America’s most prestigious universities is requiring the use of incorrect terminology in order to maintain political correctness.

This is only the latest battle in an ongoing war on words waged by open border proponents. In April, amid pressure by pro-amnesty groups, the Library of Congress announced plans to replace all references of “illegal aliens” with the terms “non-citizens” and “unauthorized immigration.” The U.S. House of Representatives eventually voted 237-170 to require the Library of Congress to use the correct legal terminology.

Changing the nomenclature and rhetoric related to illegal immigration is part of a larger effort by open-border proponents to normalize the act of illegal immigration. Force-feeding vanilla terms to impressionable students is simply one way to minimize the negative connotations related to breaking American immigration laws. It is important that Americans, especially the next generation of leaders currently in college, acknowledge the importance of upholding the rule of law, and properly labeling those who violate it.