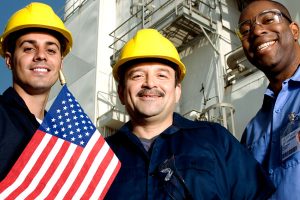 Cheap immigrant labor pads the pockets of the wealthy while ensuring the American dream is “just out of reach.” Critics say that closing the border and ending cheap foreign labor will “force employers to add benefits and improve workplace conditions to attract workers already here.” And according to Senator Cotton, that is exactly what should happen.

He states that higher wages, better benefits, and more security for American workers are the reason immigration reform is so important. Immigration policy should focus “less on the most powerful and more on everyone else.”

In his piece, he talks about wages and the law of supply and demand. With such vast numbers of workers, including an estimated 12 million illegal aliens currently residing in the U.S. and the one million legal immigrants the U.S. accepts annually, already low wages are continuing to plummet. Real wages for American citizens with and without high school diplomas have been declining since the 1970s, which Senator Cotton says is exacerbated by mass immigration and a surplus of labor.

To fix this problem, Cotton says the country needs secure borders, and the U.S. must decide who and how many can cross that border, keeping the American citizens’ best interests in mind. Today, these best interests would entail a large reduction in legal immigration and a focus on “ultra-high-skill immigrants,” though tomorrow it could be something else. A major flaw in our immigration policy is that it doesn’t evolve to fit the needs of the American people; the last time Congress substantially reformed the immigration system was a half-century ago.

Cotton proposes a policy that gives priority to language skills, education, and work experience which would allow immigrants like doctors to work in rural areas and not push down the working-class wages. He goes on to note that some critics call this “nativism” or “xenophobia,” but it actually gives immigrants who recently arrived to the U.S. a better chance at assimilation, finding a stable job, and achieving the American Dream.