You are at:Home»Immigration Issues»Crime»‘DREAMers’ in D.C. Jail DEMAND Amnesty but Might be Deported

Update:  Of the seven DACA recipients initially jailed, three have been released and four remain in custody.  An activist that was part of the original group arrested also remains in jail.   The illegal aliens who remain in jail continue to refuse to cooperate with law enforcement risking deportation.  They accuse Sen. Charles Schumer (D-NY) of “Betraying the Dream Act.”

A group of seven DACA recipients calling themselves the #DREAM7, along with another protester, have refused to give their names and fingerprints to authorities after being arrested while staging a “sit-in” last Friday at the Washington, D.C., offices of Democratic Sen. Charles Schumer of New York and Republican Rep. Carlos Curbelo of Florida.  Since their arrest, these self-described ‘DREAMers’ have allegedly gone on a hunger strike and refused to cooperate with law enforcement until an amnesty bill is passed a part of a spending deal to fund the government.

The illegal aliens apparently planned their arrest ahead of time, with one even announcing her intentions in an online video.

“I am going to be spending several days in jail,” says one of the unidentified illegal aliens in the video. “Every single day that I spend in jail puts me closer to having ICE detain me and have me deported.”

(Picture of one of the arrested ‘DREAMers’ from outside a D.C. jail)

It’s unclear if Immigration and Customs Enforcement (ICE) have lodged any detainers for the DACA recipients arrested, but now that they are facing criminal charges, Matt O’Brien FAIR’s Director of Research and former Assistant Chief Counsel with ICE says it could be a matter of time.

“This group of individuals consists of illegal aliens who are already deportable. Committing crimes (the group was arrested on the charge of unlawful entry and have refused to cooperate with police) as a form of protest won’t enhance their claims that they should be allowed to stay,” says O’Brien. “The notion that the DACA program confers some type of special protection on certain illegal aliens is utterly mistaken. The program was nothing more than an illegal attempt by the Obama administration to confer Deferred Action – which is, by statute, a case-by-case form of discretionary relief – on broad classes of people. Once the U.S. government grants Deferred Action, it can take it away any time it wants by simply issuing a notice to appear in Immigration Court.”

Curbelo has repeatedly said he will not support any type of spending bill in the House of Representatives unless it contains a DACA amnesty.  There are reports that Schumer, on the other hand, may be backing away from threatening a government shutdown over DACA.  Senate Majority Whip John Cornyn (R-Texas) has said that a DACA deal wouldn’t be part of a spending bill. 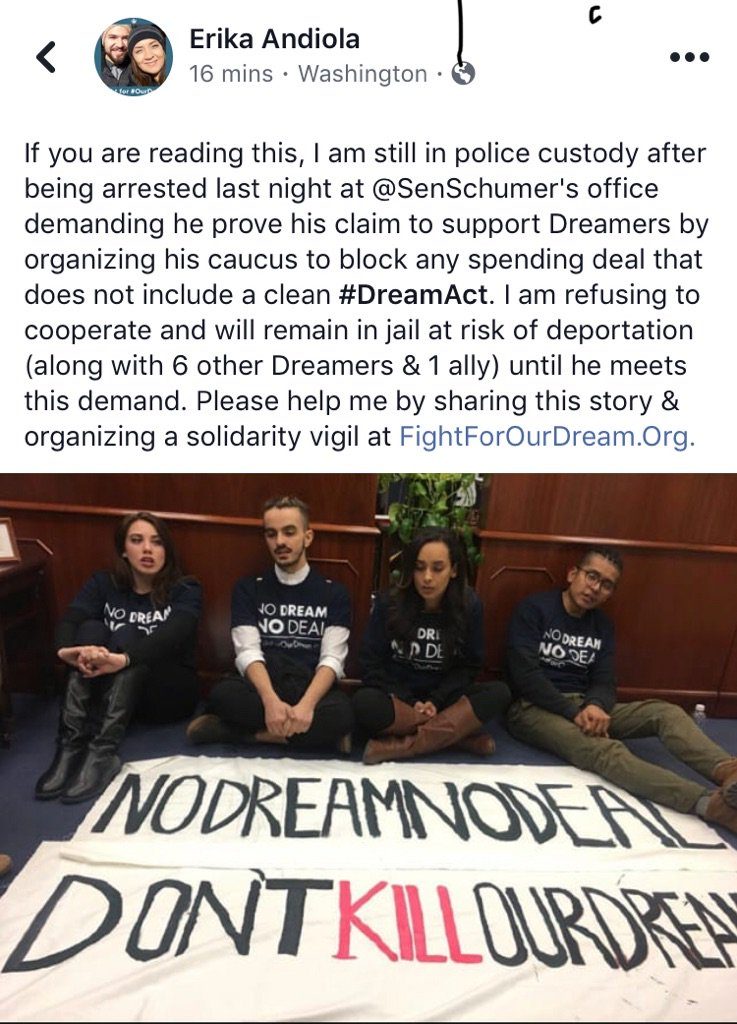