You are at:Home»Federal»‘DREAMers:’ “We are coming after you Democrats… ready to raise hell”

Democrats in Congress are facing severe blowback from the same group they shut down the government to protect:  illegal aliens.

After Senate Democrats voted to end a government shutdown by voting overwhelmingly for a stopgap spending bill to keep the government funded through February 8, illegal alien activists are vowing retribution.

“We are coming after you Democrats.”  Tweeted Erika Andiola, a prominent ‘DREAMer’ and illegal alien activist who led a hunger strike at a Washington, D.C., jail last year. “Feb. 8th or bust! If you are ready to raise hell let me know.  I know you all got jobs and other responsibilities, but this is a fight for OUR future.”

We have no other choice, but to raise hell before Feb. 8th. We are coming after you Democrats. You will not keep using us for your elections if you don't pass the Dream Act in the Spending bill.

We have no choice but to keep fighting Dreamers. What hasn't killed us has made us hella stronger. Feb. 8th or bust! If you are ready to raise hell let me know. I know you all got jobs and other responsibilities, but this is a fight for OUR future. We can't have excuses.

Democrats backed off their opposition to a temporary spending bill after they were given assurances by Republicans there would be negotiations on a DACA amnesty, which the White House says is essentially the same deal President Trump offered Senate Minority Leader Chuck Schumer (D-N.Y.) last Friday.

“Democrats realized that the position they had taken, frankly, was indefensible and they had to focus on, first, funding our military, protecting border patrol agents, funding vulnerable children through the [Children’s Health Insurance Program]CHIP program,” said White House Spokesperson Sarah Huckabee Sanders.

“These were things they didn’t disagree with, they agreed with everything that was in this CR [continuing resolution]. The president stayed firm, Republicans stayed firm and Democrats realized they had to move past that piece of legislation to focus on the conversation they are desperate to have,” she added.

Now that Democrats have seemingly blinked during their standoff with Republicans over an amnesty, illegal alien activists are accusing the left of “using” them like pawns.  Illegal Alien protests have erupted across the country, including at Disneyland in Anaheim, California, where several of them blocked the entrance to the theme park this afternoon (see below). 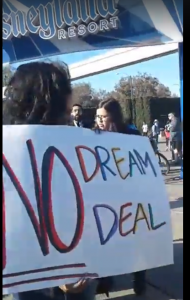 Illegal alien and open border activists are promising to continue “raising hell” and stage protests along with displays of civil disobedience throughout the country until February 8, when they believe they may have another chance at trying to get an amnesty through Congress.