You are at:Home»Immigration Issues»Society»Wait…What? DREAMers Threaten to “Self-Deport” if Congress Doesn’t Pass Amnesty

“I will leave.  I will leave America as soon as possible,” says 19-year-old Alex Velez, who along with her sister Daniela are DACA recipients. “I want to be able to leave on my terms.  I’m not going to be waiting for anyone to come for me.” 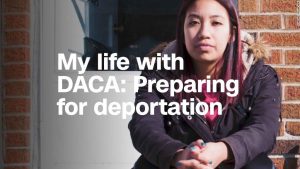 Alex and Daniela tell CNN they plan to move to Ecuador, where both are citizens. “At least we will feel safe with family by our side,” says Alex.

The idea that illegal aliens would decide to return home voluntarily if they could not benefit from remaining here illegally is one that FAIR has talked about for some time.   If people can be discouraged because they will not benefit from breaking the law or the possibility of deportation, why would we give them reasons to stay in the country?

Alex Velez is a Dreamer. She says she will leave the U.S. if a DACA deal isn’t reached. “Not having citizenship … it's not something that's going to define me. Being illegal isn't defining me.” https://t.co/6hIZpE4QFg pic.twitter.com/zlqto1bJEy

Alex and Daniela both came into the U.S. as children and have since benefited immensely from DACA.  Daniela even earned two associates’ degrees from Rowan College in New Jersey and say she’s adamant that she will put those skills to good use in her country of origin.

“One thing I’ve learned is my talent and my skills are mine,” says Daniela. “It will be hard to start life again, but we will not stay the rest of 2018 in America.”

When President Trump decided to end the DACA program last year the Department of Homeland Security (DHS) urged DACA recipients to use the time left on their work authorizations to prepare for their departure.