The photo below went viral almost immediately and was used repeatedly by the media to symbolize the issue of separating kids from their parents, causing a large swath of the American public – including all living former First Ladies – to decry administration efforts to curb the surge of families with children crossing the border illegally. It even made the cover of Time Magazine, with a menacing photo of Donald Trump gazing down at the child photoshopped in.

There’s only one problem:  The media’s narrative, and the inferences they hoped we drew from it, are all wrong. Fake news at its best. 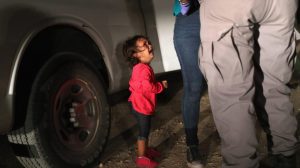 As the photographer John Moore explained to NP, the two-year old Honduran child, Yanela, and her mother were apprehended illegally entering the U.S., crossing the Rio Grande River into Texas. Moore snapped the photo after border patrol agents asked the girl’s mother to put the child down for a moment so the mother could be searched for drugs and weapons – standard protocol for illegal immigrants.  According to Moore, the separation only lasted long enough to have “very few frames of that moment before it was over.”  Yanela was then quickly picked up by her mother and the two departed together.

The father, who remained in Honduras but soon saw the photo on the cover of Time Magazine, told the Washington Post  that the child and her mom were not separated, and noted in another interview that “that his wife and child are being detained at a family residential center in Texas but are together and are doing fine.”

So much for the poster child of the family separation issue.  And yes, I feel used.

One data point about this entire incident that is important to remember as these photos continue to swirl.  According to the Department of Homeland Security, of the 12,000 children who are in the care of Health and Human Services, 10,000 of them arrived alone, without their parent.  In other words, the family separation happened at the behest of their parents, in their home countries, who sent them to the U.S alone, or with a smuggler.

P.S. Time magazine issued a correction in the online version of their cover story (except for people waiting to see the dentist, no one reads the print version any more): “The original version of this story misstated what happened to the girl in the photo after she taken from the scene. The girl was not carried away screaming by U.S. Border Patrol agents; her mother picked her up and the two were taken away together.” The story, with its misleading headline, remains however.

Dave rejoined the Federation for American Immigration Reform (FAIR) in 2016 and brings more than thirty years of proactive communications experience working with non-profits, trade associations and the private sector. Dave has written and placed op-eds in more than 100 publications for national and state leaders in fields ranging from immigration to agriculture policy, food and energy. Ray has served as a chief spokesman for several national organizations and has extensive radio and television experience as well.