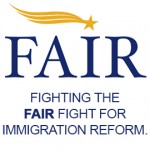 FAIR is a non-partisan, public interest organization of concerned Americans, united in the belief that our immigration policies and laws should again serve the nation’s future needs. This means better border management, lower levels of overall immigration, and a greater focus on highly skilled immigrants. With a support base comprising nearly 50 private foundations and over 1.9 million diverse members and supporters, FAIR is free of party loyalties and special interest connections. FAIR evaluates policies, seeking out solutions that help reduce the negative impact of uncontrolled immigration on the nation’s security, economy, workforce, education, healthcare, and environment.

ImmigrationReform.com is an outlet for the most recent updates on the fight for true immigration reform written and maintained by the staff of FAIR.