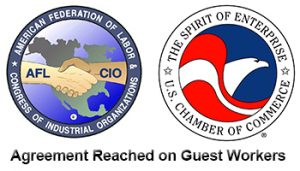 Yesterday, an outline of the AFL-CIO and Chamber of Commerce’s deal on a new “guest worker” program was leaked to the public via Ezra Klein of the Washington Post. The deal, which sells out U.S. workers, shows the lengths to which special interests will go to craft an immigration deal on the backs of unemployed and struggling Americans.

Most importantly, however, Americans need to know that while the Chamber of Commerce and AFL-CIO are selling this new foreign worker program as necessary to fill “shortages” in the U.S. labor market, the deal allows workers to change employers and then stay in the U.S.

By definition, this means that the new foreign worker program is not designed to fix any claimed shortages in the labor market. Instead, the AFL-CIO and Chamber have designed it to simply bring more foreign workers into the U.S.

This deal was negotiated as part of the Senate “Gang of Eight’s” immigration reform plan.

Call Senate Leadership NOW and tell them you oppose bringing in more foreign workers when 22 million Americans are either unemployed or underemployed!

1. U.S. immigration policy should prioritize the needs of Americans first.

4. Jobs in the construction, hospitality, retail and other industries are good jobs that Americans will do for a living wage.

5. Congress shouldn’t even consider expanding immigration until the federal government has fulfilled its duty to secure the border and ensure that those who come to the U.S. to work follow the law and aren’t a drain on public resources.